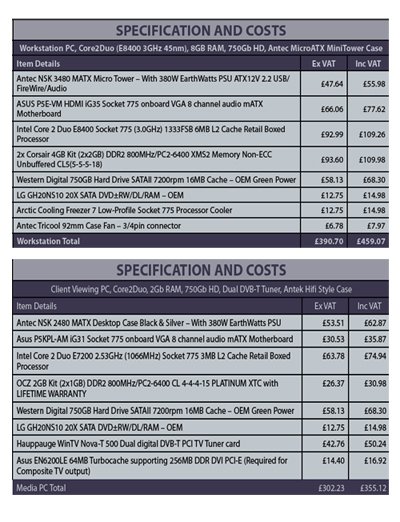 Both the cases are bundled with an '80 Plus' Power Supply. This initiative has been adopted by several big computer manufacturers, and denotes that the power supply in the system performs in excess of 80% efficiency at 20%, 50% and 100% rated loads. Some very old power supplies actually waste up to 50% of their energy, so this is a substantial improvement!

Energy consumption is becoming a hot topic in the computer world. Everyone is becoming more conscious of how much electricity they use, and how much CO2 they're producing. PC and component manufacturers have taken some measures to address the issue. 'Process Scale', effectively, how small the electrical tracks running around the CPU die are, has quite a significant bearing on power consumption. The newer Intel Core2 CPUs are based on a 45nm process; previous generations were 65nm or greater.

What's known as the 'Thermal Design Power' or TDP for short, is roughly equivalent to the wattage rating of a light bulb Both the E8400 and E7200 are 45nm processors with a TDP of 65W. From memory, the old Celeron processor we had in the previous 'Mini PC' had a TDP of 130W which goes some way to explaining why it burst into flames when the fan failed!

The hard disks chosen are noteworthy. These Western Digital 'Green Power' drives use about 50% less power than a regular SATA hard disk, with the additional benefits of running cooler and quieter, and with any luck lasting longer as a result.