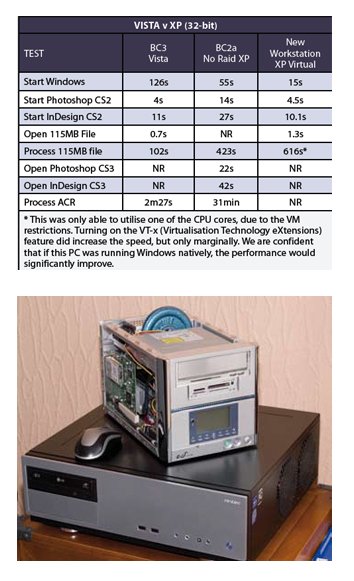 The Antec NSK 2480 Desktop Case in its black and silver livery would look stylish in any studio viewing room helped by its near silent running. Although it is much larger than the micro PC standing on top of it, we anticipate far less trouble. As well as bursting into flames it was also very unreliable!

Initially we ran both the machines with their supplied processor heatsinks. The workstation was running at about 50°C (CPU Temperature), with the motherboard running at 35°C. Installing the Arctic Cooling heatsink dropped the CPU temperature to 41°C at idle, quite a significant reduction! This was further helped by installing the two front case fans, running on their slowest setting. These fans are barely audible yet still provide plentiful airflow. The temperatures dropped a little further: the motherboard now runs at 33°C, the CPU at 40°C.

Both machines are virtually silent; in a closed room (windows and door shut) you can just about hear the low-frequency whooshing of the airflow, but cannot actually hear the fans themselves; you have to put your head right next to the hard disk during heavy disk operations to even hear it! 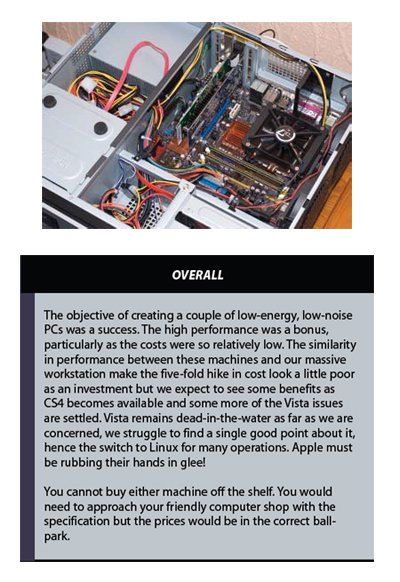 Because the workstation isn't running Windows, we can't give any native timings. We did, however, fire up a virtual machine image of Windows XP with Photoshop CS2 installed, to glean some timing information. The timings should indicate near-native performance for this specification of machine. The machine is as fast as our massively specified BC3 (if you have forgotten, eight processors and 16GB of RAM) indicating that we are yet to see the benefits of our larger investment; Photoshop CS4 is rumoured to solve this and maybe then we will grow to love Vista a little more!