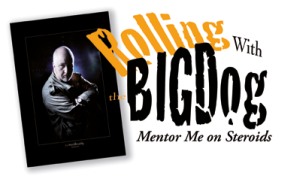 Things are constantly changing and nothing seems to stand still, maybe its just me getting older but that's the way it appears.

Now I'm all for my camera equipment getting smaller, lighter, more feature-packed and just as powerful as its bigger contemporaries, but I've noticed over several months in conversations with fellow photographers there seems to be a strange expectation, a growing expectation, to me a worrying expectation, that technology is the key! Please don't get me wrong I LOVE technology, I'm a little bit of a geek, but I'm beginning to notice that there appears to be a growing belief that the kit is clever enough to do it for you -almost with a belief that 'point and press' is all that's needed!

There's no getting away from the fact that 'point and press' garners good results but I'd argue all things can be improved. Yes I'm the first to use all the tools at my disposal. The EVF (electronic viewfinder) gives me instant feedback, colour creator allows me through the manipulation of hue and saturation to set the 'mood' of an image and if I want in-camera 'post' I'm quite happy to use an art filter if it gives me the effect I want.

Now to me that's the key ...if it gives ME the effect I want. Just like selecting a certain aperture or shutter speed determines the look or the effect of my image, just like positioning a light or selecting a modifier can also determine the look and style of an image.

The common denominator in all that statement is 'me' - I'm making the choices, I'm determining the tools I use to render my vision, I'm driving the equipment, not allowing it to drive me or even worse for the tech to tell me what to do!

So I've made it my mission to pare things back, to make images with the minimum of fuss. Yes, some effects and looks can only be achieved in certain ways with certain tools - but I'm minimising the complex and trying to fill the equipment control gap with the creative! My first image was created with just three speed lights and items from the McGillicuddy Portaflex kit. The Portaflex kit is my last- and sometimes first-line in modifier defence, it's easy to transport, flat packed, light, manipulation tools that always live in my camera bag, you've no idea just how many times this simple bit of light manipulation magic has saved the day!

My aim was to create something visually stimulating so I started by placing a full cut CTB (colour temperature blue filter) on my flash to camera-left. This unit was then placed on a stand and positioned approximately two feet above the subject and angled down on the subject. I place a barn door from my Portaflex kit on the flash to control the spread of the light.

My second flash unit had a 1⁄2 cut CTO (colour temperature orange) placed over its tube and, once more, a barn door from my Portaflex kit, so called because its PORTable and FLEXible, to control the spill of light. It's just as important to control where the light doesn't go just as much as where it strikes!