The website of Breathing Color and the associated data sheets really build this canvas media up into something special. Describing your product as having something that 99.9% of other inkjet canvas products do not have and as having 'eyepopping gamut and Dmax' invites a more critical look from a sceptical, science-based reviewer! With a billing such as that we quite reasonably expected eye-popping statistics from our audit analysis.

The 99.9% claim is almost certainly advertising hype. If Lyve Canvas is one in a thousand (for that is what is implied) this suggests that there are 999 other canvas media out there. After almost 10 years of Paper Chase we can only count 25 canvas media and so we obviously have many more to find.

We keep detailed records of many thousands of printer/ media audits and so we can make an objective assessment of whether any given medium has 'eye-popping' statistics associated with it. Admittedly, some of the comparisons are awkward because many of the older data are from papers and printers that have been improved over the years, but the trend has been ever-upwards and we have consistently created new records for our statistics, since we started Paper Chase when your editor worked for Digital Photographer.

Breathing Color are adamant that matt black ink should be used with their products where appropriate (ie matt art surfaces). We agree with this and have previously made careful comparisons of audit data using both matt (Mk) and PhotoGloss (Pk) inks. In general changing to matt ink adds about 0.2 points onto a Dmax on an art surface, varnishing typically adds another 0.4 points to the density. In case any newcomers are reading this, the reverse is true for gloss papers and matt ink smudges on gloss and lustre papers as well! Changing inks over on the x800 series Epson printers is a bit of a trial involving ink wastage. This is not so for the 3800 but this is far from ideal for canvas printing. A better option today is the 9880 printer which carries both types of inks for fast switching (and a huge gamut to boot!). Some specialist printers keep more than one machine with each ink type in different ones, an expensive but simple solution.

The table shows the objective measurements. They are not 'eye-popping'. The are, however, marginal improvements on some of the data we have collected previously. For comparison we have taken the six-canvas tests we conducted on the new Permajet products a little over 12 months ago. We chose these because they were tested as a group, on the same printers, and they include canvasses with a 'fine art, no-OBA tag', something that Breathing Color are keen to highlight.

For Lyve Canvas, the Dmax difference between Pk and Mk is slightly higher than average (ie better). The increase in gamut volume is quite small, at about 5%. This is a reasonable expectation - most of the gamut does not utilise much full black ink at all and is thus unaffected by a change in the black ink performance. Varnishing has an effect 10 times greater, producing a 55% increase in gamut volume. We noted that the difference between varnished matt and gloss inks was actually reversed in the gamut volume statistics. The matt version was not quite as glossy (we were still learning our coating craft!) but it shows that the differences are small and subtle. It is also interesting to note that the base tone of the chromata coating is higher than the competition but that it falls back into the pack when the varnish is applied. Again this is a subtle effect but it is a fact of the statistics. 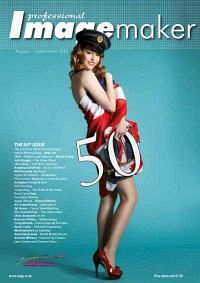