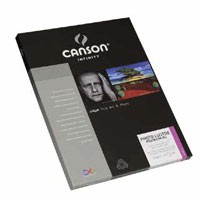 It is some time since we reviewed the entire Canson range of papers. This has recently been refreshed, with some papers discontinued and a number of surfaces added to the range and so it is timely to have a full look at the range. We have frequently written about Canson Baryta Photographique because it holds a number of records on our audit procedure and is certainly one of our favourite surfaces. As you will see though, there is much more to Canson than this!

Canson was founded in 1557 and the Arches mill even earlier, in 1492. These two mills are thus inextricably linked to the history of France, their media having been used by the likes of Voltaire and Napoleon. More recently the artists Picasso, Matisse, Chagal, Warhol, Ingres, Miro and Alechinsky have used Arches paper and so too did Irving Penn for his platinum prints. It is now 150 years since Canson started making photo papers and obtained a patent (see above). Outside of art, their paper was also used on Montgolfier's balloon. The heritage is thus secure and impressive and if you are making or selling high-value prints then the bragging rights are there for the use of! 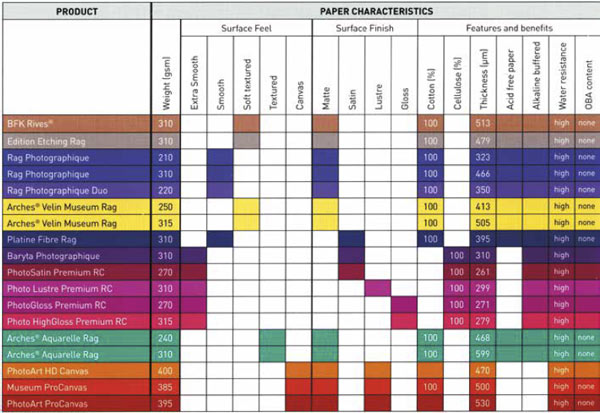 The Surfaces
The range of surfaces is shown in the table which is lifted directly from Canson's excellent catalogue. These 18 are now joined by a nineteenth, Photo Lustre 310. Some of the surfaces are available in more than one weight and some are double sided. Casualties in the recent sort out are Mi-Teintes and Montval Aquarelle 310, although there seem to be some stocks still available and they are in the Discovery packs supplied for testing.

In order to arrange the testing, we started by splitting the surfaces into those that require Epson Photo Black ink and those that require Matt Black ink. This requires yet further splitting and so we deal with the two Baryta/Fibre media separately and the canvas media also get their own slot. The 'Photo' series, defined by Canson, includes media that require both Pk and Mk ink variants.