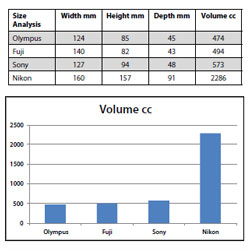 Compact system camera (CSC) demand reached 105,000 units in 2014, contrasting with DSLR sales which saw an 18% fall on a year earlier. The success of the CSC in use is not limited to The Societies' members. In the World Press Photo Awards, Jerome Sessini (of Magnum) gained a first place with 10 images in the Stories category. Fulvio Bugani gained a 3rd place in the Contemporary Issues section. The former used an Olympus E-M1, the latter an Olympus E-M5. It is the fact that photographers operating in these demanding conditions are carrying CSCs that is telling, not the technology. While it is true that the 'box between the ears' still counts for more than 'the box between the hands', the major slice of awards were won with conventional DSLRs with Canon shading Nikon in the final count.

It is timely therefore to look closely at the CSC for professional work and to work out just what it will and will not do. 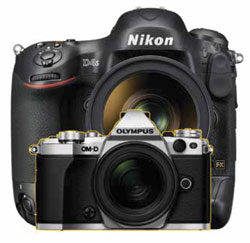 What is a CSC?
They come in all shapes, sizes and specifications, but the single characteristic which identifies them is the use of an electronic viewfinder (EVF) either on the back of the camera or via a 'conventional' viewfinder.

The use of the EVF has profound influences on the camera and lens design. A conventional DSLR has a mirror to flap up and down every exposure. The sweep of the 24mm deep mirror means that there must be a certain clearance which limits the Back Focal length of the lens design. This constraint necessitates the use of 'inverted telephoto' designs of lenses of short focal length because without it they need to be positioned too close to the detector. While much has been done with the design of lenses and glass, the release of this parameter enables better aberration correction to be achieved in lenses of both CSC and rangefinder design.

Thus the CSC starts with a lens design advantage over a DSLR but to some extent this is attenuated by the small chip size that is sometimes employed in order to make the CSC smaller. You cannot buck the physics which says that larger pixels collect more light, with less noise, but the CSC takes us back to say Nikon D200 days and C-size chips. They were good enough for their day and so they are good enough today within certain limitations. Even so, the CSC is fighting on more than one front and the ability to shift the chip and make eight consecutive images at high speed and then reprocess the lot in a short time is tilting the playing field back the other way a little.

For certain applications the absence of a mirror, combined with an electronic shutter, makes for a totally silent camera that can be used where others are not allowed. In the example below, Ian Cook has shot Rory McIlroy in the middle of his back swing. Such a misdemeanour would ordinarily have you escorted from the golf course but in total silence nobody has a clue other than the photographer. There are many journalistic situations where silence is a matter of safety, even life and death, and getting back with an image trumps all quality considerations. The old-school picture editors of the broadsheets might be spinning in their retirement homes but today content triumphs over quality and even the camera phone can be used at some considerable size across a broadsheet. In the web-based delivery that is gaining significant ground you probably could not even tell the difference.