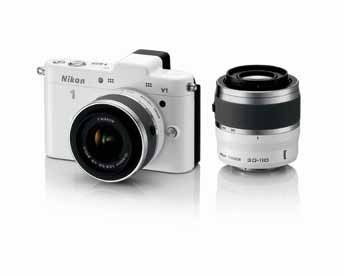 Launched late last year, Nikon's first Compact System Camera is, along with Sony's NEX-7, Fuji's X-Pro 1 and Olympus's OM-D, one of a number of smaller form factor CSCs to boost its pro appeal by shoehorning in a viewfinder. On the Nikon, we also get an impressively crisp 3-inch, 920k dot resolution LCD just below. With an exterior that resembles a Tonka toy in its high gloss white iteration (black also available), and the recipient of a Red Dot Design Award 2012, the V1 is actually the smallest in its class to include said viewfinder. Here it's an EVF boasting a 1440k-dot resolution plus 100% field of view. Overall dimensions are 113x76x43.5mm, so the V1 is still more likely to be transported in your jacket pocket than your trousers.

Nikon's V1 is also unusual in that it features not one but two AF systems. There's the ability to chop 'n' change between a 73-point phase detection AF system if an object is moving or shiny surfaced, or a 135-point contrast detect AF system if stationary or badly lit. It's no surprise to learn therefore that Nikon is laying claim to the world's highest number of AF points with the V1.

While the above sounds impressive, there's the 'issue' of the V1's sensor dimensions. Detractors will argue that the 13.2x8.8mm size of the 'CX format' CMOS chip at the heart of the V1 doesn't make it a serious contender for the professional. Like Canon's G1X, however, the sensor hasn't been overloaded with pixels: maximum resolution is a modest 10.1MP effective. In practice we were able to achieve clean results up to and including ISO1600, although a maximum ISO6400 is offered.

Another concern is that, despite the small sensor, the V1 isn't a particularly cheap option. It's £879.99 when bought with a colour co-ordinated 10mm f/2.8 pancake lens, which is equivalent to 27mm in 35mm terms. This combo ensures the slimmest profile of body plus lens, and we found it ideal for shooting 'from the hip'.

Alternative lenses include the '1' system Nikkor 10-30mm and 30-110mm f/3.8-5.6 zooms, available in a twin kit with the body. Both these optics are usefully equipped with Vibration Reduction, as image stabilisation isn't built into the camera body. As an extra, existing Nikon F-mount optics can be attached via optional FT1 adapter if you don't mind a front heavy appearance. That said, the V1's weightier body at 295g, when compared with the J1 junior model, at least makes for a firmer, steadier hold when shooting at longer focal lengths. 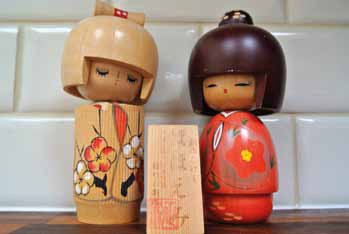 Thanks to magnesium alloy front and back panels the V1 body feels robust in the palm: build quality is similar to Olympus' E-P3 flagship Pen camera (though we've chosen to include the newer OM-D here instead). It feels very much like a toughened camera in fact, though we don't get weatherproofing. Battery life is a respectable 400 shots, or two hours of Full HD video from a full charge.

Among the inevitable omissions to arrive at a body this compact, the V1 doesn't feature built-in flash. There is, however, a multi-accessory port at the back, via which an optional tilting flashgun can be attached. Further accessory options include a GPS module and external microphone for video. That being said, using the integral microphones and our 10mm prime lens we were able to grabs some great-looking and moreover great-sounding video

If there's a niggle it's that colours can be a little muted straight out of the camera even if shooting JPEG rather than RAW. Luckily then, custom picture control includes a vivid option. Response times, particularly those for auto focus, are incredibly swift as are processing speeds, thanks in part to dual on-board Expeed 3 processors, which, says Nikon, are able to crunch data at 600 megapixels per second.

This also allows the Nikon to cram in crowd-pleasing functions such as Smart Photo Selector (SPS), which fires a burst of 20 shots before the shutter button is fully pressed and commits the best five to memory. We also have the ability to fire off stills at speeds of up to 60 frames per second (fps) if using a fixed AF point and, again unusually, at full resolution too.

In comparison with the likes of Panasonic and Olympus, who have gone all guns blazing with their compact system cameras, we can't totally shake the impression that Nikon has held back with its V1. The performance very much falls in between that of a premium Coolpix pocket compact and an entry level DSLR. Picture quality is good and will satisfy the consumer, but we fear the enthusiast and pro will be better off sticking to a DSLR. This assessment of course comes with the caveat that the V1 is hopefully just the first of many '1' system models. It's not a benchmark-raising product, but it is a confident start nonetheless.