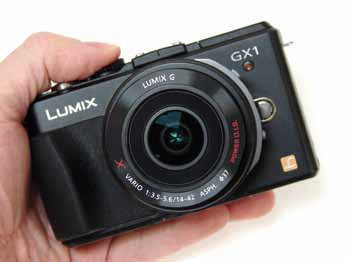 Offering what its manufacturer claims as the world's fastest AF at 0.09 seconds - ensuring that if you see a shot in your mind's eye before squeezing the shutter release you're more likely than not to capture it - the GX1, not to be confused with Canon's numerically similar compact, is the first of what Panasonic classifies as a new 'X' series of premium end Micro Four Thirds system cameras.

This flagship model is, in effect, the true successor to the enthusiast targeted Lumix DMC-GF2 and GF1 before it - Panasonic having pitched the GF3 and GF5 models that followed them firmly at the family/consumer market. The GX1 integrates a 17.3x13mm Live MOS CMOS sensor offering a 16-megapixel effective stills resolution, plus 1920x1080 pixels video at 30fps with stereo sound. Like the Nikon V1, there's no anti-shake built into the actual body, so stabilisation comes via your choice of lens.

Unlike all but the Pentax K-01 here, the GX1 doesn't feature a built-in viewfinder of any description to offer an alternative compositional aid to its backplate LCD. Still, if you want to spend £200 extra, a compatible LVF2 Live Viewfinder was released in conjunction with the GX1 late last year. Boasting a 1,400,000 dot resolution; this can be tilted upwards through 90° to enable a 'top down' viewing angle for easier low-angle shots. Naturally the same info is displayed on the EVF as the main LCD, which is three-inch, fixed and offers a standard 460k dots resolution, albeit with seven levels of brightness adjustment. Interestingly, it offers touch screen usability too - including the ability to bias focus towards an off-centre subject and even fire the shutter, if this function has been first activated, by subsequently tapping the LCD - though enough physical controls are presented alongside the screen that this facility can be ignored if wished.

In practice, we found utilising a combination of physical and virtual buttons worked best, and rather than this leading to confusion, dipping between the two rapidly became intuitive and sped up operation. Battery life is good for around 300 photos after a full charge; average for its class. 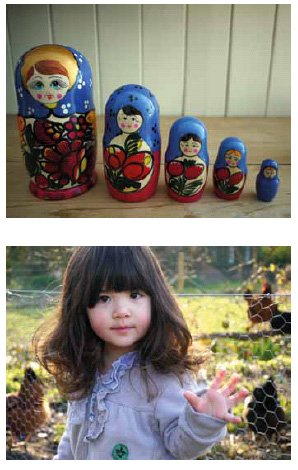 Panasonic supplied our sample with its new 'X' series 14-42mm f/3.5-5.6 power zoom. We're not massive fans, and most pros will generally prefer the twist-of-the-wrist manual operation of the regular, cheaper 14-42mm kit zoom to its mechanised equivalent, which here offers instead a compact camera-like operational level. Still, we'll acknowledge this lens and body combo does provide a slimmer overall profile. The other advantage is that the 'X' lens can provide smoother framing adjustments and quieter operation if using it for video capture, and yes, we do still get the same 28-84mm equivalent focal range in 35mm terms. The GX1 is further compatible with Panasonic's unique 12.5mm 3D lens, plus 16 other Panasonic branded lenses.

Boxier than Panasonic's consumer models, and available in black or silver-grey 'Aston Martin' finish, the camera is not as revolutionary as the addition of the 'X' might suggest, being an evolutionary step on from the earlier GF1 and GF2 models, rather than a total re-imagining. But it pulls off that trick of offering a solid feel body that's relatively lightweight thanks to aluminium construction at 318g with battery and SD card loaded. To enable a steady grip for handheld shots, the GX1 also features a comfortably curved handgrip with leather-effect rubber padding.

Though the backplate control layout recalls Panasonic's Lumix pocket snapshots, there are fortunately dedicated DSLR-like buttons for locking focus and exposure and swapping between auto and manual, alongside time-saving features such as a Q.Menu (Quick Menu) button - which brings up a toolbar of most frequently used functions on screen for faster selection. We were pleased to additionally get a chunky physical shooting mode dial with the standard manual and customisable/user-definable options. Alternatively, reliable results can be had from pointing and shooting thanks to the 'intelligent Auto' option, which here gets an illuminated top plate button to itself.

For low-light shooting the GX1 offers the advantage of an ISO range topping out at an ISO12800. Up to and including ISO1600, we found results commendably noise free, though from ISO3200 upwards shadow areas reveal a gritty appearance. At maximum ISO12800 results are both grainy and soft, though we felt this would be usable at a push in those circumstances where a shot might not otherwise be attempted. A certain amount can be forgiven when considering that at a suggested £599 for GX1 body plus 14-42mm manual zoom this Panasonic is something of a bargain if compared with the Nikon V1. More of a reliable everyday option than a pro tool though.