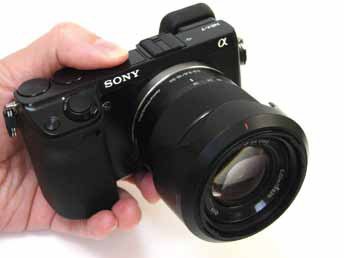 Offering a stark contrast with the Fuji by virtue of an almost utilitarian appearance is the NEX-7. Sony's enthusiast-targeted model wins out among the assembled here in that its APS-C size sensor boasts a best-in-class effective resolution of 24.3 megapixels. If pixel count is a priority, the Sony has got it. The knock-on effect of the larger sensor is that Sony's NEX system lenses are bigger than cameras with smaller size sensors, such as Micro Four Thirds and Nikon's '1' system, and, when attached to the slender NEX, can topple the camera forward and lend it a front-heavy appearance. The body dimensions are otherwise 119.9x66.9x42.6mm, and it weighs 291g unloaded. Once again, an adapter is available so that existing Sony Alpha E-mount and older Minolta A-mount lenses can be used, which really opens things out.

Anyone already owning suitable glass is directed to the NEX-7 body only option for £999 or, if not, the kit that bundles an 18-55mm zoom, providing the equivalent of 27-82.5mm on a 35mm SLR, and for £130 more. This particular lens features image stabilisation; well worth having, as the NEX body omits it.

The NEX-7 was the first compact system camera to offer a built-in viewfinder - here OLED rather than LCD, providing better contrast with deeper blacks. This offers a life-like 2,359k-dot resolution and prominent and comfortable eyecup. Additionally, an eye sensor activates the EVF as it detects the pupil of the eye, thus seamlessly allowing the photographer to transfer their gaze from larger screen to smaller without button presses.

A further bonus is that the larger 3-inch, 921k dot resolution LCD at the rear is angle adjustable, in that it can be tilted up or down, but not swung out at 180° from the body as with Canon's G1X. With a 100% field of view and near like-for-like 1.09x magnification factor, the smaller size of the EVF means that it suffers in comparison with the flexibility of the LCD below; most noticeably when shooting in low light. Burst shooting is offered at up to 10 frames per second, and the NEX-7 maintains the fun functionality of models lower down the range, including rapid-fire high resolution 3D panorama stills shooting, cleverly stitched together in camera and output as an MPO file viewable only on a 3D TV or monitor.

Unlike most high-end compacts the NEX-7 has an uncluttered appearance, its lean looks extending to three unmarked buttons and two unspecified dials. These last two access exposure, shutter speed and ISO settings when shooting in one of the Sony's creative modes. Options are adjusted with a swivel of the scroll wheel at the back, an operational device that may not be to everyone's tastes, but the best one can say is it speeds up navigation. Alternatively a gentle press of the edge of the same wheel allows settings to be gingerly tabbed through and navigation to be undertaken at a more considered pace. 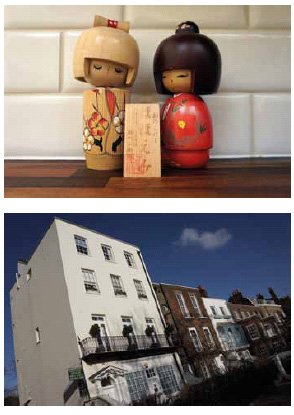 More than any other prior compact system camera, the NEX-7 is geared up for shooting video just as readily as stills, with auto focusing offered in movie mode plus a dedicated record button. We did, however, manage to accidentally hit video when we were trying to adjust exposure, such is the close positioning of controls. Digital filmmakers will enjoy having Full HD 1920x1080 pixels capture at a choice of frame rates, including 50 frames which when output at 25fps provides a cinematic quality. They'll also enjoy a less bulky alternative to the industry standard Canon 7D or 5D MKII or MKIII at their disposal.

Once the camera is active, the function of the two buttons flanking the scroll wheel/control pad becomes apparent - namely, as on all NEX models, their purpose changes dependent on which camera functions are in play. Some have criticised the Sony's menus and navigation for being less user friendly than could be in this regard; its quirks prove pretty quick to master, and button presses gradually become intuitive. Battery life is good for 335 shots from a full charge of the lithium ion battery - so similar to that of Olympus' OM-D - which is to say performance is respectable without being stand out.

Hyped on its release for the APS-C size sensor affording a high pixel count, the NEX-7 was always going to be a draw for photographers wanting optimum quality from a camera with compact proportions. With a choice of RAW and JPEG shooting or a combination of both, amazingly the NEX-7 doesn't disappoint. Yes, image noise is visible at maximum ISO16000 sensitivity setting, yet the grain is so fine it could almost be considered attractive. If there's one area in which the Sony shines beyond its humdrum exterior, in offering punchy, bright colours and pin-sharp detail, it's image quality.

Even if the NEX-7 does fall short of fulfilling the original 'DSLR-like quality in compact camera form' brief by being too large to fit even in a jacket pocket with 3x zoom attached, along with the Fuji X-Pro1 and Olympus OM-D it's one of the very best compact system cameras available, with a performance that should satisfy even the most fastidious.