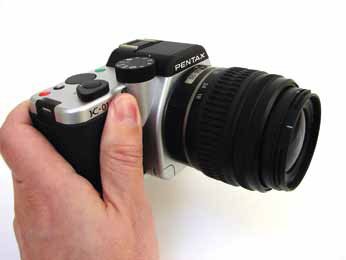 The major draw for photographers here is that Pentax's second attempt at a compact system camera, following the pocket-sized 'Q', boasts the accessibility of a K-mount. And in the process the K-01 offers compatibility with 214 existing Pentax lenses, without requiring an adapter. On that point alone, it puts the camera firmly in the lead over rivals. Another advantage here is that body-integral shake reduction is provided to help prevent blur from camera shake at longer lens settings.

Whereas detractors of the Pentax Q pointed out that its 1/2.3-inch sensor wasn't larger than that of a pocket snapshot, the K-01 addresses the issue by incorporating a 23.7x15.7mm CMOS image sensor with a total of 16.9 megapixels. Of these, 16.28 'effective' megapixels are used in the construction of a 3:2 ratio image. We also get Full HD 1920x1080 pixels video clips at 30fps in MPEG4 format with stereo sound, 5fps continuous shooting, plus a maximum ISO25600 low-light option. Additionally, when married up to the sensor at the core of the K-01, the 18-55mm zoom bundled with our sample provides a 35mm film equivalent of a wide 27.5mm to 84.5mm. Also included with the K-01 on launch - depending on which kit option you go for - is a slim profile 40mm prime lens; in fact it's the world's first compact to offer an equivalent 61mm focal length.

Now we come to the elephant in the room: in terms of its design, the K-01 is a bit of a dog's dinner. While its modernist, blocky features are love-it-or-hate-it, size wise the thicker body is a near match for the entry level DSLR to which it's supposed to be offering an alternative. Thus, in the K-01 we have a compact system camera that, unlike the much-maligned Pentax Q, isn't all that compact. While its proportions are DSLR-like, crucially it rubs salt into its own wounds by omitting a viewfinder. On a more positive note the battery life is better than most compact rivals, the chunky lithium ion cell provided here delivering up to 540 shots from a full charge.

With a build that mixes aluminium and plastic to deliver a surprisingly solid feel, one disappointment is the ridged rubber flap that protects the HDMI port. This is well hidden in that it initially just appears to be a continuation of the handgrip. But the rubber flap needs to be gingerly prised aside and then just as carefully slid back into place. We can see this being ripped over time.

The Pentax's control layout is simplistic, though we like the chunky, stiff-feel shooting mode dial nestled into the ridge for the pop-up flash and the water-drop-shaped on/off switch. We are offered program, shutter priority, manual and aperture priority, as we'd expect to find on a conventional DSLR. Serious photographers may, however, balk at the Smarties-like shiny red and green buttons. One is a user-definable control, which can be attributed to swapping file formats, digital filters or simply resetting settings while the other is a video record button. 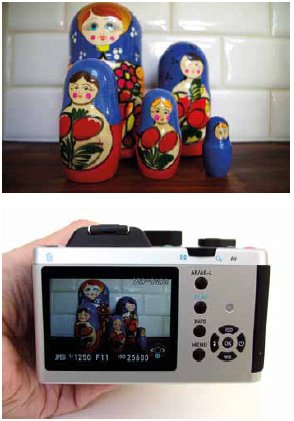 The backplate buttons owe more to a compact snapshot than a DSLR - both in their usage and appearance. However, to be fair the essentials are here - including auto focus/exposure lock, and a dedicated button for the selection of ISO, presented as one of a set of cross keys.

Taking up a third of the backplate is the fixed 3-inch LCD, which offers a high 921,000-dot resolution; just as well as there is no alternative for otherwise falling back on to frame and review images.

Flick the top plate lever to 'on' and the K-01 readies itself for action in two seconds, although in terms of speed we could have done without the LCD displaying the designer's signature for a second before it bursts into life. Luckily this can be switched off. A half squeeze of the shutter release button and, if in AF mode, there's a second's pause while the camera determines focus and exposure. Whilst this isn't lightning fast, more of a distraction is how noisy the lens mechanics are. Take a shot though and shutter lag is barely noticeable, a maximum resolution shot is written to card in two seconds.

It's a great shame that the K-01's design makes it look like a toy, as the pictures it produces have a lovely quality to them. Detail is impressively DSLR-like, with subjects rendered sharply and backgrounds attractively defocused, plus colours are really vivid on JPEGs straight out of the camera - a reliable feature of the Pentax range. Image noise, though noticeable, isn't really a problem until straying above ISO12800. We did particularly miss a viewfinder though, especially on a camera that is otherwise DSLR-inspired.

Capable of delivering excellent images, it's a real pity that Pentax has produced a compact system camera that, with a bulky size and rather eccentric design, is less capable of being taken wholly seriously. Therefore only existing Pentax lens owners need apply.