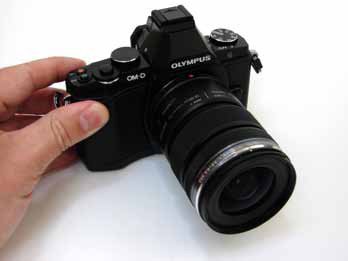 The latest Micro Four Thirds system camera to prompt reviewers to search the dictionary for fresh superlatives is priced identically to chief competitor,the Sony NEX-7. Though its retro styling, in being inspired by the 40-year-old analogue Olympus OM, is closer in mood to Fuji's costlier X-Pro1. The heart of the OM-D is similar to that of the Panasonic in that it incorporates a 16.1 megapixel 'Live Mos' CMOS sensor. Olympus has also ramped up operational speed with a latest generation TruePic VI image-processing engine. Indeed the brand is claiming the fastest auto focus of any system camera - and that includes DSLRs. Unlike the Fuji, however, it's not claiming to be a match for a DSLR with a full-frame chip. Exposures are even, detail is crisp and colours are punchy but to our eyes the Olympus cannot quite match the X-Pro1 or the NEX-7 for image quality alone.

Luckily, in terms of a 'package', Olympus has come out all guns blazing. While in its all-black iteration the OM-D E-M5 lacks some of the 'classic' charm of the Olympus E-P1 digital Pen camera from 2009 (we've yet to see the silver E-M5 first hand) it does at least come with a viewfinder built in this time - a long-awaited feature in the Olympus line-up - plus boasts a low-light performance 100 times better than the original Pen, with an expanded range stretching to ISO25600. Images at this top setting appear softened and washed out, but the option is there nonetheless. As well as an EVF offering 100% field of view and maximum 1.15x magnification, as on the Sony (and lacking on the Fuji) we also get a 3-inch, 610k dot resolution OLED screen that tilts 80° upwards and 50° downwards, increasing the breadth of framing options - plus a first of its kind five-axis image stabilisation system for improving hand-held shooting. Incidentally the EVF here features an eye sensor, so it's automatically always on when you

want to use it. Take your eye away and the main screen below bursts back into life.

Held in the hand, three fingers dug into the flattened front grip while the thumb comes to rest on a pad at the back, the OM-D is less bulky that the Fuji. But the knock-on effect of this is that the Olympus' build quality, while commendably high, doesn't feel quite as solid as the X-Pro1, if it does have the advantage of being dust and splashproof. Admittedly though the £400 body-only price differential could otherwise be spent on getting the OM-D kit that comes with 12-50mm f/3.5-6.3 lens, delivering bags of detail even into the corners of the frame. That would still leave enough cash over for the compatible HLD-6 battery grip, which in combination with the body provides a more bulked-out and therefore 'professional' appearance, plus extends battery performance to 650 shots. Also available on launch is a MMF-3 Four Thirds mount adapter - affording the camera access to a host of existing Olympus lenses. 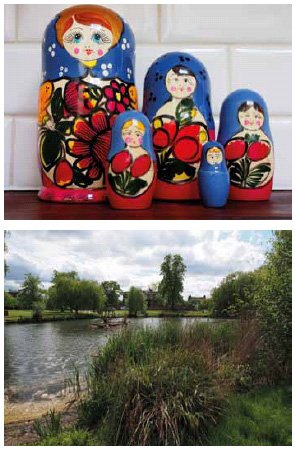 If we take a handling issue with the OM-D it's that the rear buttons are tiny - smaller that one would expect to find on a humble pocket snapshot in fact. The playback, function, menu, info, delete and control pad cross keys all require a delicate push with a thumbnail. Of course something has to give if you want a smaller camera body, but you still want it to do all the essentials.

Luckily Olympus hasn't buried these 'essentials' within on-screen menus like it is want to do with shooting modes on its super zoom models. Up top we get a familiar shooting mode dial over to the left-hand side, which features a compact eight options. Of course we get P,A,S,M settings but also iAuto for subject distinguishing and optimising point and shoot operation, scene modes, video mode and, as with any Pen camera, Olympus' Art Filters digital effects (11 in total here). On the right-hand side of the top plate there's a large main command wheel, which can be used to enlarge an image in playback mode, or alternatively display captured shots as a series of thumbnails. A second dial, a smaller sub dial, is provided at the front, encircling the main shutter release button. We also get two user-selectable function buttons, plus a main record button for Full HD video capture. As with Panasonic's GX1, a shot can be taken by tapping the rear OLED screen, which doubles up as a touch screen.

What is lacking on the camera body itself is a built-in flash, though a hotshoe is provided, as is a covered rear accessory port onto which neatly slides the mini flashgun provided in the box. While Olympus gives the impression of cramming a lot in, the camera is usable with it and in terms of controls and layout, the OM-D E-M5 shouldn't completely fox anyone stepping up from a Pen camera, nor anyone stepping down from a DSLR, such as Olympus' own E-series. In the process it raises the benchmark for what a Micro Four Thirds system camera is capable of.

All things considered though, our top three recommendations for the pro from our selection here would be the Fuji, the Sony and the Olympus - and in that order. All you need now is a commission to justify the expense.