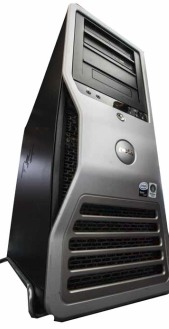 Something of a potpourri this feature. Not too long ago no digital imaging lecture would have been finished without a question about what computer to purchase. Gradually computing power has increased and been smeared out so that most computers in the £1,000-plus range can handle today's image files quite well. Push that investment out to £2,000 and an enormous amount of computing power may be obtained. Sadly though the computer coding industry has become idle in the extreme, with profligate use of the resources such that Photoshop always takes roughly the same time to open or, in some instances quite a lot longer. Our researches for this feature make glum reading: back in 2005 a machine with 1GB of Ram opened Windows XP in 38 seconds and Photoshop in 6.5 seconds.

The machine this is being typed on opens its OS in something between four and six minutes and opens Photoshop in 165 seconds. OK so there is more to get up and running on both counts but imagine if you bought a car that was billed at 60mph top speed and only did 10mph, it would be back in the showroom faster than you could do a three-point turn! In the intervening period between XP and Windows 7 (don't even mention Windows 8 and 10!) nothing has been done to make use of the additional computing power available, every bit has been wasted and a then bit chucked away as well! While the chip and hard drive engineers have laboured to pile more power into their devices the coders have sitting on their spotty backsides drinking coffee and idling their days away.

Nothing has been done to ameliorate the fact that as computers age and have more software installed they get slower and slower until the frustrated user has to either reload the operating system or buy a new machine. Our work station originally opened the OS in 55s and Photoshop CS 3 in 22 seconds - that has extended, on the identical machine with 16GB RAM and eight processor cores, to this value of between 4 and 6 minutes for the OS and 165 seconds for Photoshop.

Let's keep on the car analogy: presently I can drive to the Epson HQ in 3h 37min, leaving at noon and arriving around 4pm with a loo break. If this was my computer making the journey I would arrive at roughly the same time on the following day after a 27 hour journey without any breaks! This is progress? It is impossible to under-criticise the situation. By way of example Windows updates hold legacy files, which cannot be deleted, after every upgrade until this file is actually larger than the operating system file.