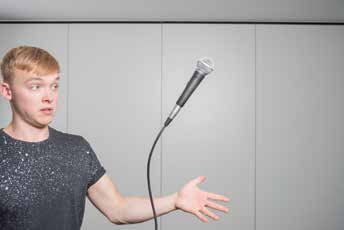 Bass player - Image 2. As you can see I had to ensure that he was positioned correctly on the stool so that when it came time to cut him out, you wouldn’t have any 'weird' flat areas visible where the stool was sitting ... so we made sure his shirt draped down just enough to make this work.

He also had to really imagine that he was reaching for a mic and his other had just let go of his bass, allowing it to float off into space.

Drummer - Image 3. For the drummer, it was most important to me that he wasn’t straight and that he was full of action. There wasn’t anything I could do about the flat area where he was sitting, so I knew in the finished image I would cover that up with the bass player. 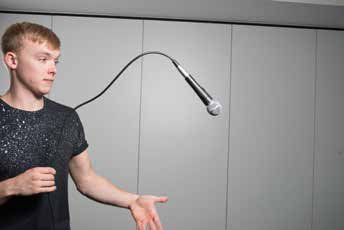 Guitar player - Image 4. Arguably the easiest of the bunch to photograph.

I decided for this one to just have him jump. IMPORTANT to note that when I did this, I also raised my key light so that the lighting would match the rest.

These are the images used of the band members themselves and as you can see in images 5-11, I used a lot of other images to flesh out the rest. I needed to make sure that the instruments were held in a way that wouldn’t look odd when they were cut out, and I needed to make sure the lighting and perspective were always the same. I then took a few photos of just mic cable so that I could have that filling space and adding depth to the finished photo.


Please Note:
There is more than one page for this Article.
You are currently on page 6 Contact George Fairbairn