Well here we are! Is it really 30 issues since a small team met in a pub in Tarporley in 2002 and conjured up a new name for The Society Photographer? After some deliberation and a certain amount of the amber nectar, the name Professional Imagemaker was chosen and it was left to a smaller sub-committee to finalise the logo for the masthead. The rest is history - from a start of 24 pages, we rose to our first 100-pager by June 2005 and then up to 140 pages by December 2006. In the same pariod he membership of the SWPP/BPPA has increased by almost 250% and the magazine run-off has to extend to 10,000 copies for some promoted issues.

To celebrate the milestone we have refreshed the page design a little and moved the page numbering to the bottom - we have had more complaints about the numbers in the middle of the margin than all other matters combined! The content has gradually expanded and more expansion is planned to cover the diverse range of activities amongst our readers. Film use has further eroded over the five years, although we are due to test some for the upcoming issues. Many big names have fallen by the wayside, including Agfa, Ilford (as was), Konica and Minolta in a shake-up that has gone to the very roots of the industry. The technology shift is a great as the mass introduction of inexpensive colour in the 1950s, or the invention, by Frederick Scott Archer, of collodion-negative emulsions in 1851 which displaced the Daguerreotype by the year of Daguerre's death. Fortunately, one thing that has remained is the desire of the public to record the rites of passage of their offspring. Even the design and production of the magazine has changed dramatically since the launch, as we now use the infinitely superior Adobe InDesign in preference to QuarkXpress and we go to press on an all- Acrobat workflow. Life for editors is not perfect, but it is getting better!

Finally a personal 'thank-you' to all our contributing columnists, contributors and the vast army of members who enter the monthly competitions. Without you, all we would have a very dry, 'parish magazine' on our hands every two months. The best thanks you get are from the significant number of readers who say that ours is the only magazine they retain on their shelves for future reference! 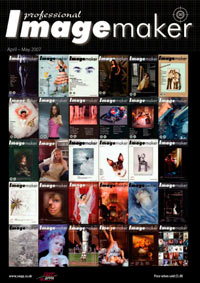