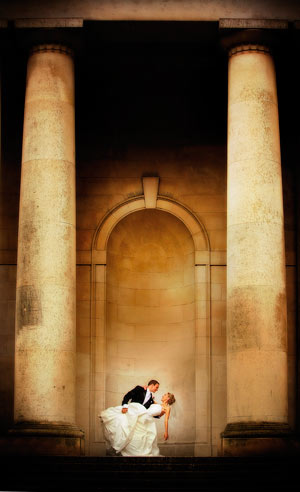 Jon Jenkins and Richy (Richard P Walton) know that to guarantee the perfect wedding album you have to take control. Leaving it all to chance with reportage is better left to the guests. Let's face it; the brides never really know what they want until they have seen the images. They always mention, natural, black-and-white, contemporary, 'when nobody expects it, etc photography without having any knowledge of what they are talking about. They can only give you an educated answer when they have seen the images. That is why you have to give them both traditional and contemporary; with this dynamic duo you get just that, two for the price of one!

Cake shots, cars, flowers, detail, shot with parents, family groups, etc all have to be covered, whether the bride has asked for it or not. They don't know what they have forgotten to ask you for until it is too late. Jon and Richy have worked together now on enough weddings to get the system right. Their team approach to wedding photography guarantees the bride (and groom) the complete range of images for their perfect album. A good mix of traditional and contemporary gives the bride the choice they need to choose for their album. The album isn't the only priority to consider, the 10x8" for Grandma and the all-important parent shots have to be high on their priorities. After all, who is paying for you to be there?

Moments don't just happen on weddings; if it was left to chance lots that can be created just won't happen. That's where Jon steps in; always communicating with the bride is the most important thing for staying in control and creating those moments that lead to great images. The flow must be kept going at all times, a good rapport with the bride (and groom) is essential. With many ideas 'in the bag' the next shot is always ready and waiting for Jon to use. Jon likes to concentrate on the 'essential' shots, of which there are many that have to be taken in the short time that most weddings give you. The favourite for Jon is the good ol' 10x8s for Grandma'; Jon likes to get these in as early as he can, 'once they are there on the card you can then get more creative'. Traditional couple shots, the big group photo, shots with parents, etc are Jon's first priority, to make sure they are taken. 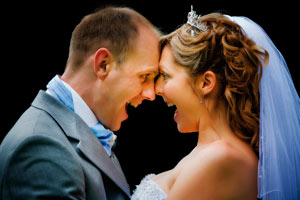 After a few essential shots the fun starts happening, still keeping in control Jon lets Richy start having some fun. Often choosing 'different' locations to try some ideas on, Richy usually waits for Jon to shoot a few close shots of the couple while he thinks about his next shot. Jon will often find himself under a tree doing some romantic headshots of the couple while Richy climbs up the tree looking for a good angle to put that contemporary touch on the wedding. All of this is achieved without losing any control of the flow. Jon has many shots and poses in his head while waiting for Richy to give him the 'nod' to tell him he's ready. Richy can now get to work on the other side of the wedding images, photos that the bride and groom would never have expected from their day. Working as a team, Jon knows exactly what Richy wants the couple to do, this teamwork prevents too much shouting at the couple from long distances and keeps the control over the day. Waiting for photographers to get into position can often lead to couples hanging around and losing that all-important flow and wasting precious shooting time. Using this teamwork has given the brides some amazing wedding images, more variety and often more pages in the album.

Even though Jon and Richy have two very different approaches to wedding photography, they both understand each other's roles and believe both styles are vital to a good wedding album.


You are currently on page 1 Contact Richard P Walton 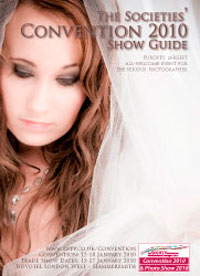