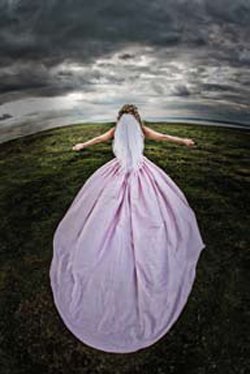 On the first wedding, things moved quite quickly throughout the day and I didn't get too much chance to use the fisheye, although there were moments when I did have time to give it a go and I got some nice shots. Arriving at the church to greet the boys, I was met with my first real task for the fisheye, as the groom arrived in a gorgeous Morgan car. The problem was where to park it for a good photo. As usual with weddings, you can only really play with what you have on the day. The driver parked the car near the museum steps, next to the church. While waiting for the rest of the boys to arrive, I tried a few angles with the fisheye. Only one really jumped out at me, a shot of the car from the front with groom and best man standing either side. There were a few other nice photos I took but the problem with the fisheye was the background. Every angle I tried I found contained too much unwanted clutter. First point to note with a fisheye - when positioning your subject look side-to-side and as far as the eye can see, because if you can see it, the fisheye will definitely get it in the frame.

Inside the church, you could get a quite different perspective with the fisheye. I took a few minutes looking around at what I could take and then asked the groom and best man to pose for a few. As with most churches, it was a bit dark so I had to open it up a bit but that's when a new problem arose. At f2.8, the lens isn't the best. On wide shots, I like to get everything sharp but the fisheye caused me a few problems. When you're at f8 and above, the fisheye is in its comfort zone and you can get everything in focus. The images come out very sharp, but open it up and the sharpness deteriorates, especially when you focus and recompose. Another point for me to put in my mental notebook. As I was not relying on the fisheye on this wedding, I could use a bit of trial and error, just as long as I got the safe shots in the bag with my usual lenses.

After the ceremony, when we got outside, and once I had a few candid photos of bride and groom greeting their guests, I could try a few shots. When the lens was stopped down a bit, it was back in its comfort zone. I got a nice one of the bridal party greeting their guests with the entire church tower in the frame. Not a competition winner, but a nice one for a background in the album. Once we were into the swing of the day, I didn't have much chance to get creative with the fisheye. I tried a few group shots with it, which came out OK - some images made the people on the ends look a bit too tall but it does give an extra element to the images giving you a different look. I also tried a shot of the bride and groom walking into the function room, getting most of the room in with them in the distance. Big mistake. I think the bride and groom took up about 20 pixels of the 10 million I had in the frame. Third point to remember - get your main subject a little closer to you than normal.

Over the next two weddings, I used pretty much the same tactics that I had used on the first - just using the fisheye when I could so that I could get a little wiser to its uses. One thing I did find with it was you have to be a little lower or a little higher to get a better perspective although, this did involve my co-photographer, Richard Walton, standing on the roof of my car to get a good angle of the bride and groom in the middle of the road.

If you are looking to get a different look to your images, the fisheye could be your answer. It really does make you think more about composition. Getting the subject and the rest of the scene right in the image can be a bit tricky but when it does come together, it gives your images a whole new dimension. It's also useful for making a group of drunken Welshmen at a wedding look good in the album. Having only used the lens on three weddings so far, I thought I would give you all some idea of what it was like for me being new to the fisheye. I'm going to be using the lens a lot more over the summer wedding season, in the hope I can get used to its qualities and create some winning images. I'm not sure I will ever master this lens, but I know I will have fun trying.


Please Note:
There is more than one page for this Article.
You are currently on page 3 Contact Jon Jenkins