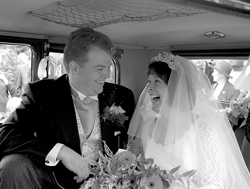 The camera was purchased with the 1Gb IBM microdrive and the professional battery pack. For purely studio work, the 340Mb or 500Mb IBM microdrives would have been sufficient, but for wedding work the 1Gb drive really does come into its own as I can shoot a whole wedding (around 200 to 250 images on the one drive). The drive itself can accommodate over 430 images shot as high resolution, low compression jpeg files or 87 high resolution TIFF-YC fi les. The latter are 17.6Mb fi les with no compression whilst the former are around 2 to 2.5Mb in their compressed format, but expand to 17.6Mb after decompression. 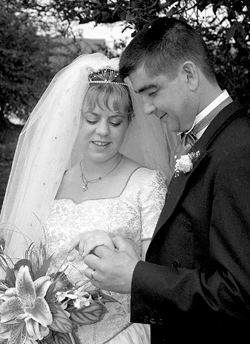 One disadvantage of using the noncompressed image format is that it takes a long time to preview fi les on the camera's LCD screen (around 15/17 secs) whereas the jpeg fi les can be seen fairly quickly (around 2 secs). The good news is that I have seen little or no image degradation due to saving the images taken as jpeg fi les, even on fairly large groups of people. The most likely areas where you will see compression artifacts is in broad areas of similar colours (e.g. the sky).

I will not attempt to do a full review of the camera or the Super CCD chip which captures the image.


Please Note:
There is more than one page for this Article.
You are currently on page 2 Contact Carol Steele