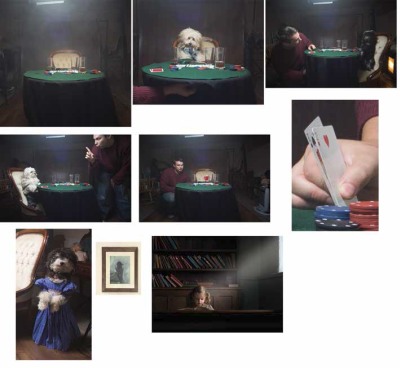 Cheating at cards is not new! Caravaggio depicts a scene in which the centre figure is indicating the cards, with his worn out (money counting?) gloves, to his accomplice on the right who is fumbling for the correct card hidden in his belt. Similar tricks are underway in the Georges de La Tour painting in the centre, the cad on the left is bringing one of his two 'spare' aces to the table from behind his back.

Shift forward a few centuries and the Saint Bernard is holding a cigar staring keenly over the chips at the bull dog across the table. All the other dogs study the Saint Bernard trying to determine what is in his hand. We can see that he only has a pair of deuces. Will the bull dog fall for the bluff? A large pile of chips in the middle of the table is at hand. 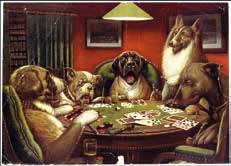 This painting is the first in a series of two, so you need to look at the final episode, Waterloo, to discover the ending. The bull dog did not call the Saint Bernard's keen bluff and his pair of deuces won because the other dog folded with at least a pair of jacks .The Saint Bernard has dropped his cigar and is using both paws to collect his big winnings. All the other dogs bark in disgust after seeing the Saint Bernard's cards, spilling a glass of scotch in the process. Two versions of this painting exist. They are very similar but have some unique differences.

One adds a poodle bringing the boys drinks and the dog's facial expressions are slightly different in each. In fact, the multiple versions of Waterloo have been misinterpreted to be distinct ideas in the story line played out in A Bold Bluff and this painting. Only two paintings are used to depict this tale though, not three. The reason for the different paintings is not clear, although it is believed that the one with the poodle carrying drinks is Coolidge's original idea, which Brown and Bigelow modified for their needs producing the other version. The exact circumstances are sketchy though. Other changes forced upon the artist were the title, as Coolidge originally called this painting Judge St. Bernard Wins on a Bluff.


Please Note:
There is more than one page for this Article.
You are currently on page 2 Contact Tracy Willis