A Photographic Exhibition by Sergio Muscat

"Let us break their bonds asunder, and cast away their yokes from us." Psalm 2:3

Exhibition Commentary
Handel's Messiah engulfs the church, and in a dark corner at the back, a single light shines on the dancer who, enthralled by the music, dances, oblivious to my presence. I try to keep it that way. I don't want to break the spell.

The question persistent in my mind, as I try to absorb the sensations around me, is "How do I bring this all together in an image?" I want to convey the sense of joy, peace - the power of the music and fluidity of the dancer.

We are both improvising. There isn't much that can be done in terms of planning such a shoot, so I wanted to also convey the improvised nature of the exercise in the images I was taking. The camera was constantly stuck to my eye ...and I followed. Instinctively I squeezed the shutter, capturing long exposures of the dancer's movements, while the music resounded constantly in my head. I let myself go, not even checking to see what was coming through except during the occasional break in music and dance. I was truly improvising, and I needed to set up the camera to reflect that improvisation.

The body of work resulting from our brief but intense session is collected in this exhibition. As with most of my work, it is the product of multiple performances - an amalgamation of music, dance and photography. Ten images depicting the freedom that unbound artistic expression can produce. 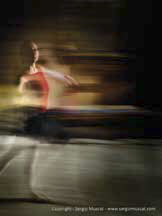 Two years ago Sergio Muscat wrote up his trip to Paris where he had used a 4/3 camera for the first time. It was ahead of its time and much of what he prophesised has come to pass! Ed.

Tuesday, 08 October 2013
A few weeks ago I was in Paris. I love that place, and I'm not a big city guy. But Paris has got something special - it feels homely, accessible and doesn't overwhelm (not in the big-city atmosphere way, at least). Paris is nonetheless large and, as many have stated previously, best seen on foot. The point here is that for almost 10 days, I left the apartment in the morning, caught the Metro and spent the rest of the day out and about on foot.

For good reason, when travelling (and not only), one of my main rules is to carry as little equipment as possible. For Paris, as for many trips before it, it was one camera and one lens, plus a compact for casual events and evening drinks. I was fine with this set-up photographically, but my back wasn't, after lugging around a D700 (1kg) with a 24-120 f4 (700g). That's almost 2kg on my shoulder (I use a sling-strap) most of the day for 10 days. By the end of it I didn't want to grab a camera again for a while. Granted I'm not getting any younger, but I am pretty sure anyone would experience this in pretty much the same way. Fact is, DSLRs are huge and heavy.

To be fair, I'm a big fan of 35mm sensors. I ditched DX when the D700 was released and have had no regrets at all. Image quality is superb, ISO sensitivity is impressive. Still, it's a five-year-old technology, and a great deal has happened since then. Back in 2008, FX was the only way to achieve the kind of image quality needed for fine art photography, particularly if shot under not-so-favourable conditions such as indoor handheld, requiring some pushing of the ISO sensitivity. The D700 did (and still does) an amazing job at it, and I have printed images up to 24"x32" without any qualms. The camera was so good that Nikon didn't replace it until last year - an unprecedented occurrence in the previously high-speed-development world of digital photography - and in reality, it wasn't even a replacement since the camera is still being produced.