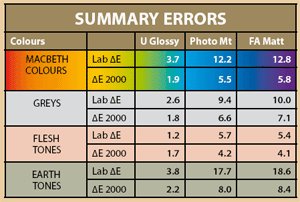 "...this media is now crowned as the king of the gloss canvasses, nothing we have tested to date gets even close..." Photo Ultra Glossy Canvas

Summary ErrorsOur original intention was to hold over the review of Innova's three new canvas materials to the next issue. However, initial testing of the Photo Ultra Glossy Canvas was so impressive that we decided we had to prime you so that you could go and look for yourself at Focus. (Visit stand C30.) Ultra Glossy Canvas is, as far as we know, the first canvas to employ a baryta-like coating, the type which have so impressed us over the past six months of testing. Despite this we were still taken aback by the test results - this material has lifted the standards to new heights in every department, sometimes by considerable margins!Just to take Dmax as an example. It was so high that we immediately remeasured the sample thinking we had made an error. We recalibrated the spectrophotometer and returned the same value of 2.40. We should have been ready for it really. We noticed, as soon as we made the profiling target print, that the depth and vibrancy of the colours were outstanding. 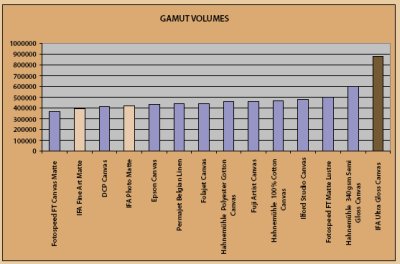 We made high-resolution profiles on an Epson 4800 using Photo Black ink. This printer does not have a media setting for 'canvas' so we chose Premium Glossy Photo Paper and a resolution of 2880dpi. The initial print was about 5 per cent too dark and a couple of per cent desaturated, so we tuned the profile to produce an almost 100 per cent improvement in what were already good figures. All parts of the gamut were accurately recorded, particularly in terms of hue and saturation. The remaining errors were in the lightness channel and caused by the slightly low reflectivity of the base material - you cannot add more lightness by adding ink. This had the greatest effect on the primary yellow, adding ink to create the saturated yellow dropped the lightness by a few points. Despite this the average error returned was 3.7 ΔE Lab/1.85ΔE 2000 bringing this canvas material up with the best of any type of surface. Rather bizarrely the results were so good that this canvas would meet the GRACol/FOGRA standards for high-end contract proofing! The average error for all the flesh tones was 1.2ΔE Lab, a barely detectable error over the entire gamut of skin tones.