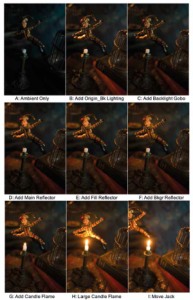 And finally a wee bit of Photoshop for improving the candle flame and to remove the magic-arm supporting Jack; I found that if I wanted a nice big juicy flame as we see in the final image, that it lit Jack too much, so in the main exposure I shot the flame when it was first lit so it wouldn't have time to build in size. A second exposure was taken once the flame had time to build. These two versions were stacked together into Photoshop's layer panel with the small flame version as the background layer (see Image 002 G) and the big flame version in a layer above (see Image 002 H). The big flame version was hidden from view with a Hide-All layer mask (black layer mask) and then you just select parts of it; primarily the flame and its big halo were painted into view over the background layer using the Paint Brush tool and with white selected as the foreground colour. At the end of the shoot I shot a final frame where Jack and his magic-arm support system had been rotated to the left side of the frame (see Image 002 I). This shot gave me a version with the magic-arm overlapping a different area of the background. Now it was a simple matter to paint into the composite the non-magicarm background once again using a Hide-All layer and a little more white 'paint'. Obviously registration from one image to the next is paramount and so a tripod was used. Once the composite was finished, I added some noise to the image to give it a grainy feel (see Image 001).

So there you have it, one light, many sources and a little Photoshop, but before I sign-off, I'd like to leave you with this; I was at an art gallery this past weekend and it struck me, as it often does with art, that it may be more important to have good art-speak than it is to have great art. So just in case, I thought, I better cover myself: What does this secular Yule-tide, politically correct image mean? Well, Jack may be playing with fire, but much more is going on here - the scene shows Jack fleeing the bonds of his past. The cage behind him representing those bonds or imprisonment, his gaze to the left symbolises the past (the right would symbolise the future), and the cage in front on our right signifies that we can never be truly free, not even carefree Jack with his fire-impaired pants. Really? Anyhow that's my art-speak and I'm sticking to it).


Please Note:
There is more than one page for this Article.
You are currently on page 2 Contact Dave Montizambert