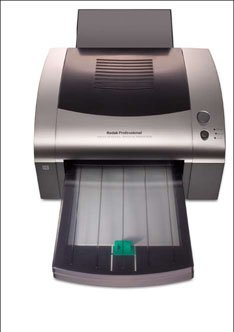 This is a dye-sublimation printer. For those of you who are unfamiliar with the technology, dye-subs were all the rage for high-speed proofs in the early days of DTP, producing prints of dubious longevity, water resistance and cost. They took a bashing for a time when Epson Photo Stylus printers hit the market, but Kodak has stuck with the technology, as it has a number of advantages in terms of speed, robustness and ease of use. It has also made great strides with fade resistance (it was never required when dyesubs originally came out). In general dye-sub does not have the legs of pigment ink-jet products but it is suitable for event photography and other non-fine art applications.

There are inherent speed limitations when ink-jet printing, due to the speed of droplet-firing that can be sustained. Such matters do not trouble dye-sub and prints can be rattled out at great speed, even under army, battle conditions (although this printer is not a mil-spec device). While the top-end Kodaks can do a 10 x 8 in 39 seconds, the 1400 takes a more modest, but still impressive, 75 seconds. The size and weight of the 1400 make it very suitable for event and on-site photography.

The unit is 24cm high by 78.6cm long and 43cm wide. It is self contained in that the paper is moved back and forth (four times) within front and rear chambers, before it emerges from the front. The paper feed-tray holds 50 sheets of paper, which needs a full reel of ribbon media. Changing both paper and the ribbon is quick and easy and with no liquids you are safe moving the unit about in your car. The format sizes are 8.5 x 12, 8.5 x 14 and A4. Within the larger sizes you can output 2-5 x 7, 2-6 x 8 or 4-4 x 6 images but only after assembling the pages manually. The unit is interfaced via a USB-2 connection. The noise level was claimed to be less than 60dB printing and less than 50dB idle. We found it rather noisy, certainly the nosiest printer in the office. 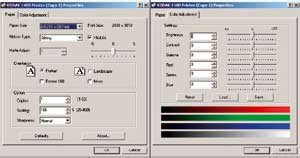 Software
The printer has a simple interface with none of the complexity associated with ink-jet printers. You select Glossy, fiddle with the colours, if you desire, and that's about it!

There is a calibration utility, for which you are obliged to print, and assess, a matrix of 50 grey clusters, to find the most neutral. The number corresponding to the most neutral cluster is then typed back into the software and the printer Look-up Table for permanent updating. Picking the winning cluster is quite painstaking and we cheated by using a spectrophotometer.

The print quality deteriorated badly after calibration but we subsequently discovered that you need to run half a dozen prints to "burn-in" the printer (others have reported the same effect). Since this initial hiccup, lasting only for the first few prints, everything has run smoothly and we have had reports that the OK performance is sustained even when the ribbon is changed.

Performance Prints made using the Kodak drivers were very neutral over most of the grey tone scale, never drifting more than a point and just biasing towards magenta in the shadows. The weakest colours were the greens, which were too yellow. The flesh tones were desaturated by about 10% and rotated a few degrees towards yellow. The average error across the Macbeth Colours was 11.4 Lab ÄE/6.5 ÄE 2000 - fairly typical of an unprofiled printer. The graph illustrates the error spread more concisely. 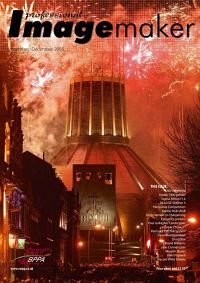