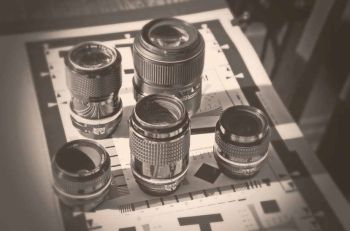 The quest we set was quite straightforward: to expolore the performance of some old Nikkor lenses on a modern DSLR (a D700). A supreme advantage of the Nikon system is that older lenses will still (mainly) connect to a modern camera and provide a certain amount of functionality as well. The major loss will be auto focus, but for situations in which manual focus will suffice, this is hardly a burden. Indeed, such is the dumbing down of the modern lens that it is actually something of a joy to handle an old lens with distance engravings and an ability to quickly set at the hyperfocal distance! The modern Nikon camera allows you to set up 'Non CPU' lens data so that basic exposure metering is re-established. Focus confirmation is routinely available.

The meta data includes the lens focal length and the aperture, shutter speed but not the focus distance. The Test Lenses 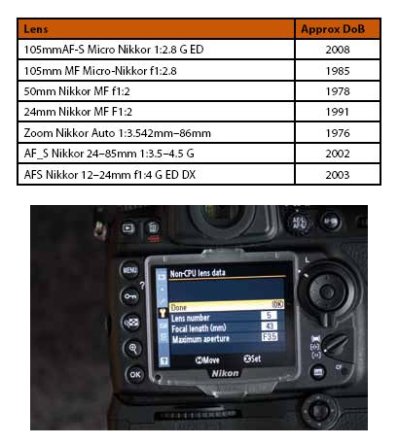 With a lens inventory going back to the early 70s we had plenty to choose from, but we selected the following lenses for test

One interesting feature is that all the old lenses have a 52mm thread and thus the ability to share things such as polarising filters.

Testing -Test Targets Test targets have their place in lens testing, but only just! After all very few people take images fine black and white lines for a living (some used to, but modern electronic chip manufacture is now imaged by non-lens systems and lasers!). Even so we attempted to do a 'rough sort' of the lenses using test targets. All it showed us was that the old 43-86mm Zoom-Nikkor was a bit dodgy near the edges, something we always knew, the lens was known in its heyday as 'ol' pin and barrel'! Other than that we found that the interaction between the target lines and pixels simply 'moire-fringed' the test beyond any useful comparisons.