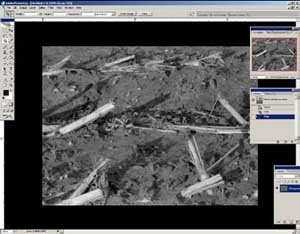 The developer comes in two, 100ml bottles (Solutions A+B), which are diluted 1ml to every 100ml of distilled water. When A followed by B are placed in the water to make up the working 'one shot' developer then it's ready to process. I wanted the best acutance (apparent sharpness) and smoothest grain structure,so followed the recommended partial stand method which involved a very limited agitation of only 10 seconds every 3 minutes for 10.5 minutes, at 24˚C. After this I simply used a stop bath for 1 minute, 4 minutes fix, and a generous wash of 5 minutes, followed by a wetting bath then hanging to dry.

After drying, the close inspection began, as I tried to see what the benefits were. At first the tanning and staining could be seen in a brown colouration of the film emulsion, holding them up to the light showed a vast tonal range. I then scanned the film using an Epson 4990 flatbed scanner to create a large 16-bit greyscale file, which I viewed in Photoshop. With a basic scan with no curve or levels adjustment, a full tonal range was apparent before even considering any post-scan adjustments. Before me on the monitor was an image that was almost as Ihad visualised it in the field and I knew that the regular dodging and burning associated with other developers had been greatly reduced simply by what Prescysol EF had yielded during the developing stage.

[1] During further scrutiny I could see the smoothness of the mid greys and superb acutance, particularly in the fine detailed branches of a tree in the image. [2] I then zoomed into the foot of the image where I feel detail and sharpness is essential to draw the eye of the viewer further into the image and could see delicate highlights in the remains of the white field crop and rich depth within the shadow they cast on the almost black soil. [3]

After a very limited time using some basic selections and curves to refine the tonal range to exactly what I needed the image was completed and ready to print. [Main image spread] I have tried many developers over the years and this is the product that has impressed me the most in terms of ease of use and accuracy. After processing several other sheets of film in Prescysol EF it reaffirmed my belief that this is indeed quite simply one of the finest products I have ever used.

I mentioned earlier that I was set in my ways with a safe and reliable processing system for my films, well this has now changed and I can say that Prescysol EF is the only product that I will use until, perhaps, Peter Hogan introduces another!


Please Note:
There is more than one page for this Article.
You are currently on page 3 Contact Paul Gallagher