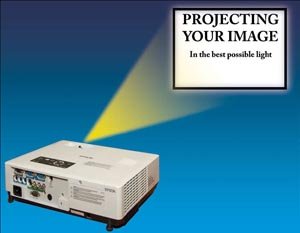 The use of digital projectors is increasing in all spheres of business and the home. Prices have tumbled and the number of options has increased. As photographers there is one thing we should understand at the outset - we count for nothing in this marketplace! All development and advertising targets the business user (predominantly) and the home cinema user (increasingly). Both have quite different requirements to the photographer. There is a direct analogy with LCD monitors - they burn your eyes out with their 250cd/ m2 luminances because that is what the gamers and office users want. Photographers and their gloomy (but more accurate) 85 to 100 cd/m2 have to pay a premium to get the level of control that we need.

An instance of this bias is given by the much-quoted tests conducted by the Munsel Color Laboratories on behalf of Texas Instruments. TI invented the DLP system and show that the LCD rival only lasts for 4,000 hours before the colour has deteriorated to the point of failure (not the bulbs - they were replaced as needed). DLP claims no deterioration after this same period. Let's put some perspective on this information. If you are a photographer who projects for two clients per week for an hour each, it is going to take you 38 years to burn out your LCD projector! Even a home user, watching a two-hour movie every night of the week is going to take five years to fail his LCD.

Similarly we should be wary of claims for newer, better technology - sometimes it is simply the newcomer getting around the patents of their more accomplished rival (cynical - who us?).

Try before you buy - fat chance! 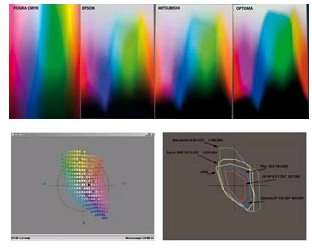 Faced with the dilemma of making a purchase, just how do you go about it? We spent the best part of an afternoon on the telephone and the web trying to chase down a projector showroom and drew a complete blank. By way of example, the Sony Centre in Cheshire Oaks (a large, local retail outlet village) had no working projectors. They put us on to their branch in the Trafford Centre who told us that they only ever had one projector working as a showroom model, but it was broken. At least they answered the phone - the Toshiba Centre just told us (automatically) that all lines were busy and hung up! We tried a number of professional photography outlets, none of whom held any demo models and most of whom bought in projectors to order. On the web we thought we would be on to a winner with 'justprojectors. com' but their opening page announced that they did not operate a showroom. They do claim to provide a 'ring-back advice service' (which they failed to do!) and their website is certainly very comprehensive. Some of the specialist office suppliers, designers and builders will get demo models in on request, but this is rather out of the league of a soletrading photographer, more the patch of universities, hospitals and big companies. At the end of many hours we were left with a sore ear and no idea where to go to see a projector working. The only glimmer on the horizon is that Epson have recognised the issue and started to address it - watch this space!

To examine the situation more fully we gathered together three projectors (with laptops) and projected them in the same room, at the same time. This gave us the opportunity to visually assess the systems, by the simple process of pulling the lens covers on and off. We also tested the projectors before and after profiling and took photographs of the screen displaying our print calibration test target. 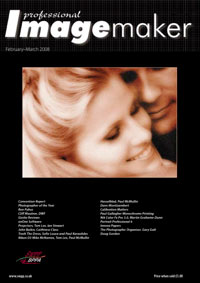