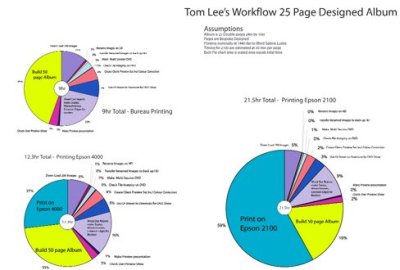 Tom views each image weeding out rejects, making sepia images, monochrome images and applying a variety of edge effects using hot keys and Photo Frame. He completed his task in 2 hours plus 5 minutes to make a preview CD using "pictures to exe" followed by 20 minutes watching the actual show right the way through.

The preview build thus takes about 2 1/2 h with little scope for shortening the time without reducing the effort spent in getting things right. You owe it to yourself and your client to keep up your standards at this stage! Tom's keyboard shortcuts are just about as slick as you can get and the time spent developing them is repaid many times over.

After the client has viewed the selection of images and chosen the candidates (and we have not allocated time for this by the way!) Tom starts the page build. He makes each one up individually and devotes about 4 hours on average to make a 50 page album. This time could be shortened by using a package such as Spicer's Montage, Campdale's ProAlbum or Bellwood's Album Page Templates - at the cost of individuality. Doing so might save you about 2h on the timing shown.

At the other end of the scale David Simm from the USA averages higher times but in fairness he works mainly in the upper end of the market! Here is how he replied 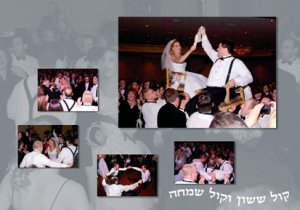 "I have just finished composing 120 images into fifty pages and with interruptions (scores of 'em) it took me just two and a half working days to compose, the files for that album will be sent to Graphi for production. The significant thing here is the number of times production stops for the interruptions.

A "normal" forty side album with seventy images takes on average one and a half days, the exceptions are days when I have a creativity drain and/or and equipment/software breakdown. The sample album I made from the UK wedding shot in August took me over a week but that is huge, over two hundred pictures across something like sixty-five pages."

These sorts of timings were confirmed by some other wedding photographers we spoke to - Dave Simm is not alone in being slower. At the other end of the scale Gary Galt's studio are much faster - see below.

It is in album-building where the greatest benefits of experience will count most and the acceleration as you make more pages will be greatest. In teaching Photoshop, Mike finds that for his students, 10-fold improvements are quite common, so if your first album takes a whole week do not give up, you are right in the middle of the pack!

On the horizon is the new Epson Album Maker, launched at Photokina. This is a drag and drop template utility which also plugs into Photoshop. It is also able to make slide shows with music and high work load job lists and data saving. We will report in due course when we have had a look at it. At Photokina it was priced at 500 Euros in the press release. It should be released in UK by the time you read this. 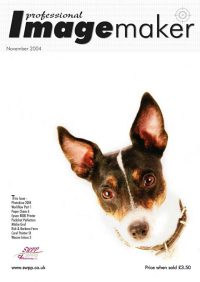