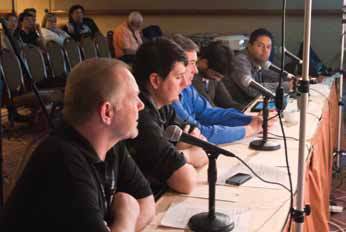 No sooner had the bags been unpacked from the London Convention and the dust settled on the early start to the year, I found myself on a new quest to the other side of the pond to attend the Wedding and Portrait Photographers International bash in Las Vegas. This year, however, would be different...

Due to the distances involved and the downturn in the photographic sector generally, I normally attend the event every two years. Our own Societies' Convention is by far the most important for making business connections and seeing equipment for the upcoming season, but I do like to see how the Americans fare and it's always good to pick some ideas up that I'm not likely to get in dear old Blighty! It's also a good excuse to get away from it all for a week or so.

I normally have the luxury of swanning around from platform class to trade show and back again (passing by the slot machines on the way) and taking in the bright lights without a care in the world, but this year I had the honour of being asked to judge in their prestigious 20x16 International Print Competition. Wow, no pressure there then!WPPI (and Nikon V1) - a report by Tom Lee 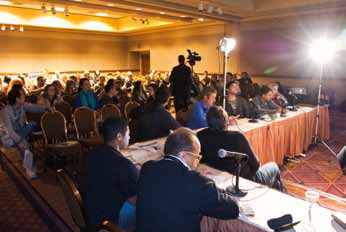 one of the busy judging rooms

As an experienced judge and orator for the Societies over many years, you'd think that I'd take it all in my stride. But there were these butterflies in my stomach that just wouldn't go away. A few slaps around the face with a wet fish and I came to my senses though, and began to relish the excitement of being on the WPPI big stage.

It was with great pride that I took up the mantle of one of the few Brits to have graced their hallowed turf. I took my place in the judging room alongside some notable contemporaries - Ken Sklute, Jennifer Maring, Roberto Valenzuela, Kevin Jairaj, Susan Stripling, Luke Edmonson, Sam Sciarrino and Al Gordon. A few nervy scores later I felt right at home, even securing a successful challenge to have a print receive its due accolade. Two days later I still hadn't seen daylight and was completely wacked but totally empowered by the experience.

Due to the heavy judging schedule I still hadn't been anywhere near the trade show and already missed two platform classes I had originally intended to see. Still undaunted, day three was all before me and a couple of classes by Roberto Valenzuela and Tony Corbell caught my eye. It was time to get my educational fix - one in the morning and one in the afternoon.

Dinner was late that night and I could already feel the strain. Day four was another lecture in the early morning but I was left wondering if the guy was trying to teach me or sell me something. This is sometimes a problem with the market driven attitude of some speakers. Undaunted I left and joined a class given by the celebrity photographer Brian Smith. A completely refreshing change with the plain and simple approach we used to have before all this digital mayhem.