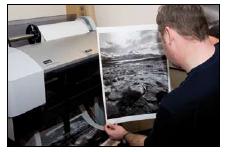 Calibration and auditing in progress.

Paul Gallagher recently installed a 30" Apple display to replace a very inferior, inexpensive LCD monitor that was gradually driving him to distraction with its inability to match his he simple ideas are the best! Critical viewing of prints should always be carried out in good light, of known quality. Nothing is purer than sunlight but it has the problem of being variable

Paul Gallagher recently installed a 30" Apple display to replace a very inferior, inexpensive LCD monitor that was gradually driving him to distraction with its inability to match his calibrated prints. We know that his prints are correct because his Epson 7800 has been both profiled and audited for accuracy.

A 30" screen is truly massive - they grow in the car between showroom and home, and always look bigger on a desk! There are considerable benefits to a 30-inch real estate and although he initially had problems driving the Apple screen on his PC, this was eventually solved with a new graphics card to deliver the full 2560x1600 resolution. This enables the user to run an application such as Photoshop with Bridge running alongside, or perhaps InDesign running with a full set of palettes permanently on view. The graphics card has to support Dual Link, but there seems to be a few other issues if the discussions on the forums are to be believed. No profiles are provided for Windows use and so you need some form of screen calibrator; the Macs are catered for. 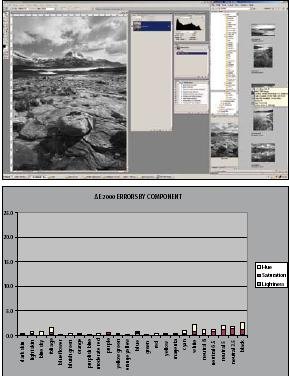 There is a huge amount of space for applications and palettes on a 30- inch screen!

The Apple produced very good data on colour audit, the errors only just made it onto the graph!

At 400cd/m2, the brightness is miles too high for graphics work and we cut it down to the desired 95cd/m2 with the brightness slider on setting 2 (from 10). This is a vulnerability of the system, as an inadvertent touch of the bezel is all that is needed to knock the setting off, thus destroying the calibration. The bezel has a power switch, a brightness button and USB ports, nice and simple.

After calibration with an X-Rite XR Pro we audited an error of 1.85 ∆ELab/0.64∆E2000. In a field of activity where we smile broadly if we get below 3.0 ∆E2000 on a print, this was a very good performance. Now the screen matches the prints!

The Apple Cinema Display can be bought for £1,162 inclusive of VAT or £1,209 with a 3-year warranty. It is compatible with both Mac and PC but check the situation regarding your graphics card before taking the plunge. In other tests the Apple did not perform as well as the slightly more expensive Eizo FlexScan SX3031W.

Matching print to screen is vital in Gallagher's workflow as creative tone adjustments are made by eye, on screen. 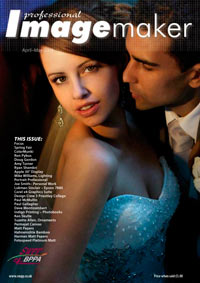