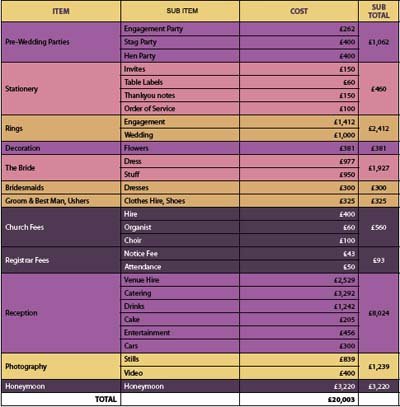 A recently published survey from You & Your Wedding caused quite a bit of comment, with reports in the broadsheets and presumably, red tops, including lots of analysis. The headline news was that the cost of the average wedding has risen above the £20,000 mark for the first time. The survey included responses from more than 1,500 readers. Such is the desire to make headlines, that getting the figure above £20K needed a bit of jiggery pokery to include a new category for gym/fitness club fees (for getting the bride into her smaller dress - apparently they average between one and two sizes smaller). Cynical we may be, but why not lump in the cost of getting the bride from womb to the altar next time, in an attempt to get the figure even higher still? 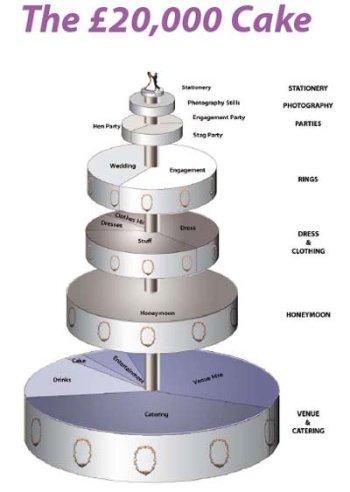 That not withstanding, we took a few figures from a variety of sources to get close to the £20K mark and then broke down these figures - hence the cake. The photographer's share of the cake is presently falling - by about £40 between 2006 and 2008, against a backdrop of a 96% rise in the cost of an engagement ring, 42% on the honeymoon and about 40% on venue and catering costs. Overall, while the photographer's share has fallen back by eight per cent between 2006 and 2008, the cost of the wedding has risen by 61% (given the caveats of lumping in gym fees, etc). If you look at the whereabouts of our piece of the cake we are now on the next-to-top tier, just below the stationery and the plastic bride and groom. Statistics being what they are though, we got 4.2% of the total expenditure in 2008 (£839 out of £20,000) but only 3.0% in 1996 (£353 out of £11,650).

The overall message remains the same - the photographer gets quite a small piece of cake for recording the couple's vast expenditure (grotesque was a word used in The Guardian). However, information is power and you might use the statistics in your marketing pep talk when engaging the bride and groom or talking them up to a more expensive album - 'shame to skimp on the record of the event' and all that!