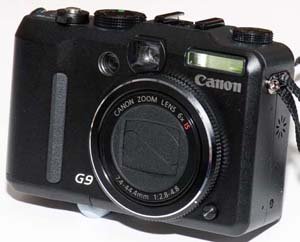 Mike McNamee takes a look at this highly specified compact

Although I have always had a personal leaning towards cameras from another maker, I have always had a secret love affair with sinwp Canon compacts. This goes back to the early 70s when I borrowed a walking companion's Canonet G-III 17 QL and ran a few films through it in the Highlands of Scotland. The results from the 40mm f1.7 lens were impressive, were blown up to 30-inch prints, and a love of compacts began. The angular shape, robustness, feel and the simplicity of rangefinder focusing always made the compacts of this era very satisfying to use. #

The 40mm lens was almost perfect for landscape. The compact camera has, of course, undergone the same meteoric rise in sophistication as that endured by its SLR cousins. The QL of the Canonet denoted a Quick Load mechanism consisting of a flap of metal that allowed you to pull out the film leader, close the back and watch for the little mechanical flag to move, to confirm film transport. Happy days, when such a trivial feature was a USP that eventually ended in 1.2 million G-IIIs being sold, probably the best selling camera of its type of all time. The production ran from 1972 to 1983, a huge cycle by today's 'change-them-everymonth' attitude. Canon currently have sold 100 million compact cameras.

The G-III has long gone but we photographed Mrs Editor's Olympus RC, a quite similar camera to the Canonet, alongside the G9. To the untrained eye they look quite similar. The G9 was bought in an almost instant decision as a camera that we could shoot up a pole (see the review in this issue), because it supports Live View for feedback to ground level. The sub-agenda was a need for a lighter camera to take on the Camino de Santiago later in the year - the thought of humping an SLR across the top of Spain clinched the deal and had us straight over to Calumet!

The specification of the G9 is immense and I do not intend to list all the features and talk about them (sinwptry www.dpreview.com for a comprehensive report, as always!). The essential items are a 12 million pixel chip, and a stabilised zoom lens that extends from 35mm f2.8 to 210mm f4.8. The shutter speeds range from 15 seconds to 1/2,500; the ISO from 100 to 1,600. Importantly the camera shoots RAW, JPEG or both at the same time. The storage is provided by an SD or HCSD card. With a specification such as this the camera should in theory be suitable for occasional or emergency use by a professional photographer, particularly a camera to have in the car at all times.