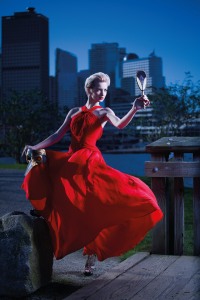 Back in the late 90s (1990s not 1890s), I received my first 1 digital camera, which was a prototype worth $65,000, created by Foveon. It sported four megapixels and had not one but three imaging sensors set behind a lightseparation prism. I was one of the few lucky North American photographers asked to beta-test the system - I didn't have to buy the thing:). Now the really cool deal about this camera other than the fact that it created true colour instead of interpolated colour, was the fact that it did not have a physical shutter. This allowed me to light subjects with strobe or flash and sync my camera shutter to any shutter-speed, even 1/8000th of a second. Wow! With this I could shoot in any environment and have complete independent control over strobe/flash lighting and existing available light. It was amazing, I was able to shoot straight into the sun, even at f2.8, use my shutter up to its fastest speed, 1/8000th, to control the brightness of the sky for a deep blue, while frontal-lighting my subject with strobe/flash for f2.8 and no shutter clipping or vignetting of the frame! I thought I had died and gone to heaven! Shooting at wide-open apertures with super high shutter speeds while using studio lighting on subjects outdoors was not a dream but a reality. A few years later after the beta program was done, I got into hi-end digital camera backs and DSLRs. In terms of shutter sync-speeds with strobe and flash, these systems paled by comparison; the digital back I used could only sync up to 1/500th and my DSLR could barely sync at 1/200th. How sad. But things got better, just a few short years ago PocketWizard, the manufacturer of wireless triggering systems for strobe/flash and camera, introduced the programmable Flex TT5 transmitter/receiver and the Mini TT1 transmitter which can be connected via USB to your computer so you can alter its functionality.

One of those functions is an offset that allows your DSLR to capture strobe/flash bursts using any of your DSLR's high-speed shutter settings (above X-Sync). Wow, now that is exciting! It does come at a price though; you can only effectively do it with your strobe unit set to full power and depending on what shutter-speed you select you will lose between 2 to 6 f-stops of light (2 stops at 1/500th and 6 stops at 1/8000th - according to my tests). Also it won't work with just any studio strobe unit; this technique works best on strobes that take longer to dump their charge of light (flash duration) onto the subject, the lights I used in my tests and on Image 001, had a flash duration of 1/300th of a second at full power.

The most suitable strobes are typically older and/or more powerful models; older is often better because newer designs tend to use more capacitors and so dump energy faster which is perfect for freezing action but not a good thing for HyperSync. HyperSync craves slower, but not too slow, bursts of light. Also, powerful units generate more light energy and so need more time to dump this light onto the subject, and since they are more powerful, losing 2-6 stops of light with HyperSync isn't as much of a problem. In addition to this, usually the reason you are using HyperSync is to allow you to shoot with shallow DoF in full-on sunlight, which works to your advantage because big aperture openings don't need a ton of light, but you do need a more powerful strobe to beat the sun in the first place. In a nutshell, slower (within reason) is better! So dust off your old strobes, they may have a new lease on life. But keep in mind that these units are designed for studio; if used on location outdoors you will need lots and lots and lots of cable or you will need an energy source to plug into making a generator or a battery unit to power them a necessity, unless of course there are some GMO AC trees nearby. 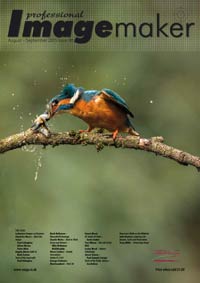