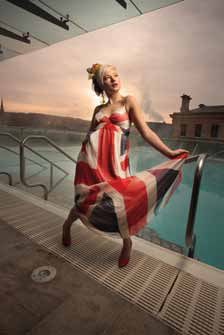 Skin-smoothing technique used on the image opposite Marko's brief for this set of images was to retain the early morning, spring feel. The TIFF images supplied already had a delicate warmth to them [1], so, after adding quick Levels and Hue & Saturation adjustment layers [2], I set about smoothing the model's skin tones.

Firstly, I made a duplicate layer of the background and named it 'skin'. Using the Colour range selection method (select>colour range) I sampled the model's forehead area of flesh. Within this menu dialogue box, I tweaked the Fuzziness slider to enable me to select as much of the model's skin as possible without including the other parts of the image. The great thing about making selections through Colour Range is that it makes a selection based on colour tone rather than luminosity, which means that darker areas such as the model's eye lashes and lip edges remained unselected.

Clicking OK, Photoshop gave me a rough selection based on the model's skin tones. With this selection active, I entered Quick Mask mode to tidy up the selection. Exiting Quick Mask mode, and with my 'Skin' layer active, I clicked on the Layer Mask icon. This meant that I now had a layer of the skin areas, isolated from the rest of the image (see [4]).

With all layers visible, but with my skin layer active, I navigated through the filter menu to Surface Blur. Surface Blur is a clever filter and ideal for smoothing skin tones as it only blurs smooth, flat areas of the image. This means that it can smooth the flatter cheeks and forehead, but does not destroy the feature details. This makes it really good for skin work. I blurred the image slightly more than needed and clicked OK. As all the layers are visible, I could see the smoothing effect on my skin layer (see [3]). Keeping the layer blending mode as normal, I lowered the layer opacity to 45% to reveal enough of the original skin detail on the background layer underneath. The result is a pleasing, realistic but smooth, skin tone on the final image.

Marko asked retoucher, Michael Croker to look after the postproduction and we asked him to report on his efforts - here it is!