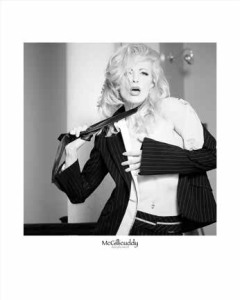 I was privileged to be shooting one of my favourite models (whose face you might recognise from the OM-D E-M1 adverts!) in a stunning location. Again, this is what makes the Big Shoot Experiences really special; I needed an internationally published fashion model and a stately home to shoot her in so that I could take some images for Olympus - and everyone who came along on one of those three days got to take them as well, without having to pay thousands of pounds for the model or the venue!

I kept the lighting extremely streamlined and simple here: it was all done with the McGillicuddy Big Softie in its reflective mode, 'tailed' with an additional length of reflective material clipped to the bottom to provide added wrap and fill. As always, I'd metered the ambient light that was in the room and from there I knew that I could get away with shooting handheld - which I definitely wanted to do, so that I could try the 1/8 second shutter speed and 1/10 second shutter speed and see what the E-M5 Mark II was made of, and really put the improved images stabilisation to the test. 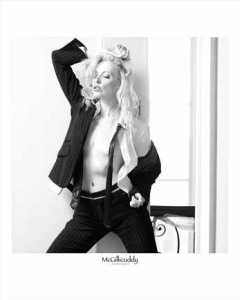 The planning is very different when shooting black and white, becauseyou've got to either know and anticipate how the colours are goingto translate or you need to set your camera to shoot in mono. Despitedecades of shooting black and white images, I still find that visualfeedback immensely useful! What I wanted was to isolate the subject'spale skin and black suit against the grey tonalities of the environment,which basically consisted of yellow and magnolia walls.You'll see that most of the images are lit the same way, with the lightnot entirely 'tabletopped' (positioned at an acute angle) but being quite'frontal' so as to create that kind of very soft, low-depth shadow that hasbeen embraced by a lot of fashion imagery. In the final picture, however,where the subject is standing in profile, you can see that what I've done isfeather the light a little bit more. And that has the effect of increasing thecontrast of the light on her face, accentuating her features and the textureand tonality of her hair and the garments.


Please Note:
There is more than one page for this Article.
You are currently on page 2 Contact Damian McGillicuddy