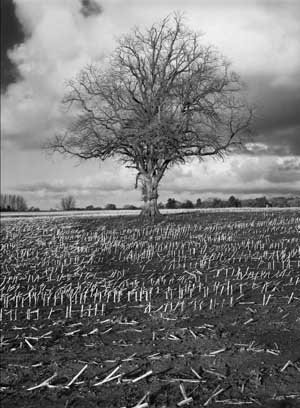 Some time ago, the late Barry Thornton introduced a series of developers for monochrome workers, based on refined developers of the past masters and received high acclaim for them. During this time I had settled with my own methods and chemicals and saw no need to deviate and try these alternative products. This remained the case until recently when I had repeatedly heard of a new product, introduced to the market by Peter Hogan of Monochrome Photography, who was also continuing to sell Barry Thornton's developers.

The product was Prescysol. I visited Peter's website (www. monochromephotography.com) and could immediately see that it was an 'Aladdin's Cave' for the fine art monochrome worker and after a further trawl through several pages of the web and discussion forums it was clear that this product was making some very big waves across the monochrome world. Furthermore, I had found that the original Prescysol had been upgraded and refined to Prescysol EF which was reported to be markedly finer and sharper than the original.

Prescysol EF is an extremely fine-grain, tanning and staining developer. As the developer is absorbed into the emulsion it begins to tan or harden depending on the amount of exposure it has received. As the tanning in areas of high exposure occurs it restricts the further absorption of more developer thereby 'self limiting' the development process. Conversely, in areas of low exposure, the lower tanning action allows development to continue - which, translated, means development of shadow detail beyond the development activity in the highlights.

Because the stain, and tanning is proportional to the level of exposure, it provides a continuously variable mask of density and, as the staining occurs mostly between the silver grains, the grain is considerably softened, resulting in a smoother tonal gradation. Furthermore, because the developer is, by its very nature, 'self limiting', then most films can be processed for a standard time, using the same agitation. I simply had to try it!


Please Note:
There is more than one page for this Article.
You are currently on page 2 Contact Paul Gallagher