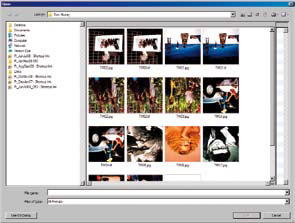 Microsoft, panicked by the encroachment of Apple into their core business, have attempted to strike back against their, 'very noisy competitor'. One stunt they pulled was to gather together a bunch of pro-XP, Vista-naysayers presumably, feed them with chocolate and stuff, and then have them endure a presentation on a supposed follow-on to Vista, codenamed Mojave. When they had elicited favourable responses they told the assembled naysayers that all they had been shown was actually Vista. This tells us two things:

1. Feed people enough chocolate biscuits (doughnuts - whatever) and they will make nice noises for you.

2. Microsoft employees have not got enough to do. What this has to do with my upside-down thumbnails I have no idea, maybe Mojave will make them the right way up again. I do, however, have an idea what effect this sort of malarkey will have on Apple sales!

So much for Vista, what about the very small PCs. Well they make good incendiary devices, having had a passable attempt at burning Editor Towers to the ground. The onlyway we could keep the second illegitimate son of BC2 working (bastard computer - get it?) was with the device shown in the photograph - and, yes, they are dumbell weights you can see holding the CPU down! If you think that is crazy you should hear the noise the thing made.