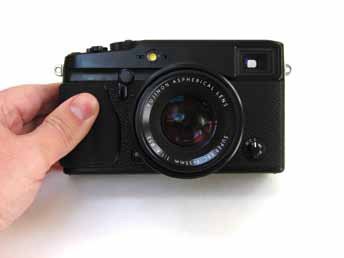 Ever lusted after a Leica but couldn't justify the expense? With its M8/M9 'inspired' appearance complete with rangefinder-type knobs and dials, and solid metal build the mirror-less X-Pro1 is the kind of showy, retro-styled system camera that makes a statement. Falling under the fingertips there are top-plate controls for adjusting exposure compensation (+/- 2EV) and manually controlling shutter speed from 1/4 sec to 1/4000 sec.

While there has been plenty of thought paid to the exterior, it's also notable for being Fuji's first interchangeable lens compact, so the fact that it arrives almost fully formed is impressive. And with it we have yet another system and yet another mount, an X-lens mount for Fuji's equally new XF series lenses. There are three Fuji compatible primes available on launch: a jack-of-all-trades f/1.4 35mm lens, a wide-angle f/2.0 18mm and an f/2.4 60mm macro/close-up lens.

The 16-megapixel camera is, like the Sony NEX and Samsung NX range, further notable for featuring an APS-C sized 23.6x15.6mm CMOS sensor, here adding on-board sensor cleaning. This 'X-Trans' chip, which offers a new colour filter array its manufacturer claims negates the need for a resolution degrading optical low-pass filter, boasts a 16.3 effective megapixel top resolution that doesn't overload the sensor. The combined result is that shadow detail is commendably noise free at higher ISO's. As if the above wasn't intriguing enough, Fuji is making the bold claim with the X-Pro1 that its sensor, when combined with new 'EXR Pro' processor, delivers an imaging performance on a par with a full-frame sensor. While that sounds a little excitable, light sensitivity range stretches from ISO100 to ISO25600, and continuous capture speed is set at 6fps.

Also of note here is a 'hybrid' viewfinder. In its dormant state this is an optical viewfinder, and when active is an EVF, 0.47-inch in size and offering an incredibly high 1,440,000 dot resolution. We found operation of this dual-use entity benefits from a period of familiarisation and experimentation, especially as the optical viewfinder doesn't offer the through-the-lens view that its electronic equivalent does.

The alternative aid of the 3-inch, fixed 4:3 aspect ratio LCD back screen can also be used for framing shots as well as reviewing them and displaying settings. Compared with the EVF this screen boasts a lower but still high 1,230,000 dots, thereby exceeding the specification and clarity of most DSLRs. 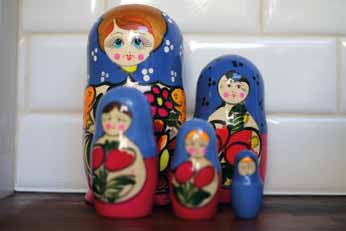 In terms of improved portability over a DSLR, whilst more compact the Fuji X-Pro1 is no 'pocket rocket'. With body-only dimensions of 139.5x81.8x42.5mm it's a sizeable, reassuring chunk of metal, to be transported around the neck or slung over a shoulder. Yes, we could squeeze the die-cast aluminium alloy body with small rubber grip to its right-hand side into a jacket pocket without lens, but the 450g weight when loaded with memory card and fairly average 300-shot battery feels prohibitive. Like a DSLR, and unlike some of the cheaper CSCs, this is a camera that feels made to be gripped and operated in both hands, whereby the thumb of the left hand hovers over the 'drive' mode button and the right forefinger is poised over the shutter release button, itself ergonomically encircled by the on/off switch. A switch just beneath the lens mount allows alternating between single and continuous auto focus and manual focusing.

As noted at the outset, for lining up a shot there's the choice of switching the view between LCD, optical viewfinder or EVF, a 'view mode' button provided specifically for this purpose - although having three options at your disposal does become a tad discombobulating. Helpfully, Fuji has additionally provided an eye sensor option, whereby the main LCD neatly deactivates and the EVF kicks into life as an eyeball appears level with it. The advantage of the EVF option over the optical variety is not only do you get a more accurate view, but that also you can review captured images without taking an eye away to glance at the LCD below. We found exposures to be even, colours naturalistic. However, for interiors and despite the camera's steadying bulk, we did get some image softening instances of hand wobble, while busier scenes do tend to confuse the auto focus, in which circumstances manual adjustment comes to the rescue.

For general-purpose photography we were using the X-Pro1 with the 35mm lens attached. Coupled with the APS-C sized sensor this delivered bags of detail across the frame for general scenes and some lovely shallow depth of field effects - subject sharp but background attractively blurred - when shooting closer up. Most pros will certainly be pleased with the detail and depth delivered. Our only gripe is that AF is a little slower than we might expect given the price, and this goes too for video at 1920x1080 pixels and 24fps - selected via the drive mode options rather than provided with a one-touch record button. In this respect the Fuji doesn't seem as geared up to video as Sony's NEX-7, but the capability's here.

The £1,000+ body only price tag means, integral viewfinder aside, that the Fuji's nearest competitors are the Olympus OM-D and the Sony NEX-7 while pushing it into pro territory in terms of expense. Lovely as the X-Pro1 may be, another question is, of course, do enthusiast photographers really want to have to invest in yet another whole new system of body and lenses? When a camera and the images it can produce (with a little coaxing) look this gorgeous, the answer is probably yes. For its combination of looks and performance, this is the most 'pro' camera of our bunch.